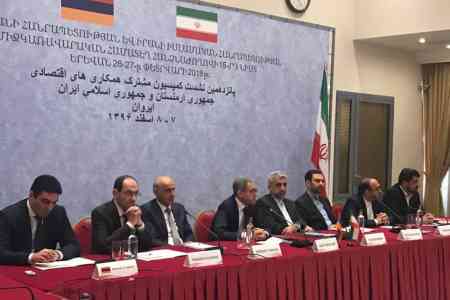 ArmInfo.  Minister of Energy Infrastructures and Natural Resources of Armenia Ashot Manukyan does not currently see any obstacles to the large-scale development of the Armenian-Iranian relations.

He stated this on February 27 in Yerevan on the margins of the 15th meeting of the Armenian-Iranian intergovernmental commission. Nevertheless, as the head of the Energy Ministry noted, it's no secret that the trade and economic potential of Armenia and Iran is not being used to the full.  According to the minister, the programs planned within the framework of the intergovernmental commission for the last year were ambitious enough, but, as it turned out, quite realistic. Today, without waiting for the results of expert assessments, according to the head of the Ministry of Energy, it can be stated with certainty that the parties were able to find ways to solve the tasks set.

Today, as Ashot Manukyan said, the Armenian-Iranian relations are at a rather high level. The next proof was the visit of Prime Minister Karen Karapetyan to the Islamic Republic of Iran in October 2017, during which important agreements were reached on the construction of the Meghri hydropower plant, the implementation of the FEZ project in Meghri, and the construction of the 3rd high-voltage power line Iran- Armenia. In the framework of the last project, according to the head of the RA Ministry of Energy, the interchange of electricity between the RA and the IRI from the current 300 MW will increase to 1,350 MW, (previously announced a figure of 1,000 MW, ed.), Which will triple the volume of Iranian gas supplies within the Gas in exchange for electricity "from Armenia. The implementation of these projects, according to the Minister, will help to strengthen mutual ties and increase bilateral trade.

In addition, Ashot Manukian underlined, on the agenda of bilateral relations, to develop free trade not only between the Republic of Armenia and the Islamic Republic of Iran, but also with the help of the Armenian side to expand economic ties between Iran and the EAP countries. In this regard, Yerevan attaches particular importance to the development of international transport corridors, including in the context of the development of multimodal transport, and also hopes for the possible participation of Tehran in the implementation of the project to build the Iran-Armenia railway. With this in mind, Manukyan said, the Armenian side intends to address the drafts in more detail during the next meeting of the inter-departmental commission.

It should be noted that according to the data of the National Statistical Service of Armenia for January- December of 2017 the trade turnover between Armenia and Iran reached $ 263.4 million, with an annual growth of 10.1%. In the structure of foreign trade turnover, exports will be $ 84.1 million. with an increase of 11.8%, and imports increased by 9.3%, reaching $ 179.3 million.

Recall that Prime Minister Karen Karapetyan, on the invitation of the First Vice President of the Islamic Republic of Iran, Eshak Jahangiri, paid an official visit to Iran on October 9, 2017. The Prime Minister of the Republic of Armenia and the First Vice-President of Iran pointed out the program of construction of the 3rd power line 400 kV Iran-Armenia among the important programs of the bilateral economic agenda. The parties noted the great importance of implementing the program of the Meghri hydropower plant.

For the development of economic, trade relations, Iran-Armenia was pointed to the significant role of the free economic zone Syunik, its cooperation with the Iranian free zones Aras. Among the important spheres of cooperation between Armenia and Iran, the development of international transport corridors, multimodal transit transportations, the possible participation of the Iranian side in the construction of certain sections of the program of the North-South road corridor were indicated. It was also about the trilateral energy cooperation between Armenia and Iran-Turkmenistan.

The importance of active cooperation between the customs authorities of the two countries was also noted.  Prime Minister Karapetyan informed that the Government of Armenia initiated the program of modernization of the border checkpoint Armenia-Iran. Touching upon the negotiations over the Iran- EEMA free trade agreement, the Head of the Government of Armenia expressed hope that the process will be completed as quickly as possible and noted that the Armenian side is ready to provide the necessary assistance.