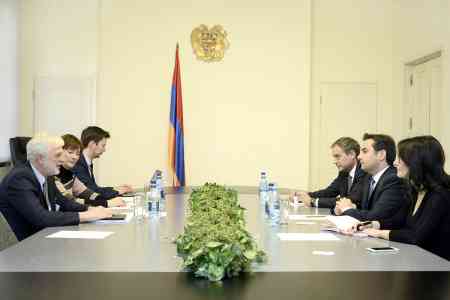 ArmInfo. Head of the Main  Department of Civil Aviation of Armenia (GUGA) Sergey Avetisyan  received a delegation headed by the deputy chairman of the Belgian  airline Brussels Airlines Herman Carpentier. The sides discussed the  prospects for the resumption of flights on the  Brussels-Yerevan-Brussels route.

According to the press service of Armenian aviation regulator, Herman  Carpentier informed that the airline seriously thought over the  implementation of the flight, especially taking into account the  positive dynamics and growth of passenger traffic in the aviation  market of Armenia. Development data, as the representative of the  airline indicated, can positively affect the provision of  profitability of the route, which will link Armenia with Central  Europe.

Sergey Avetisyan expressed his readiness to provide the airline with  the necessary assistance in arranging flights. As the head of the  GDCA pointed out, in the case of signing the Agreement with the EU on  the Common Aviation Area (paraffined in Brussels on November 24,  2017, ed.), The Belgian airline will be created more favorable  conditions for the expansion of the network of routes.

"The meeting was also attended by the chief manager of the  International Airports-Armenia CJSC Marcelo Vende, who also offered  his assistance to the airline in the organization of flights," the  message of the GDCA says.