SoftConstruct intends to expand its activities in Armenia 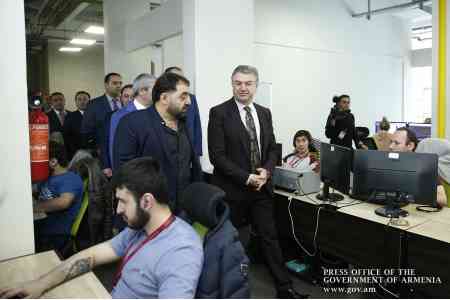 ArmInfo. The Prime Minister of  Armenia Karen Karapetyan visited the office of SoftConstruct, located  in Yerevan, on March 30.

According to the press service of the Armenian government, during the  bypass of the office of the company, the Prime Minister was  represented by SoftConstrukt, which in the sphere of information  technologies is engaged in the creation of programs, their deliveries  and maintenance. Founded in the UK, the company has opened  representative offices in 14 countries and has about 500 partners. In  SoftConstrukt and in related companies, about 2.5 thousand employees  are employed. In addition to gaming software, the company has also  created a number of other programs, including Ucraft, which is a site  for fast site creation, CRM, aimed at providing communication with  customers, MegaFeed service is one of the leading programs in the  world, allowing the fastest and most effective method of collecting  information about games in online mode right from the fields.

The Prime Minister was informed that SoftConstrukt programs and  applications of the MegaFeed system allow receiving information from  any corner of the world at a speed of 0.5 seconds, which is much  faster than any television retransmission. As for the FCBanking  program, it is envisaged for credit institutions.

The company's executives noted that it is planned to expand  MegaFeed's activities in Armenia from year to year and increase the  number of employees.

The RA Prime Minister welcomed the active activity of the company in  Armenia, the steps aimed at implementing new programs and creating  additional jobs.