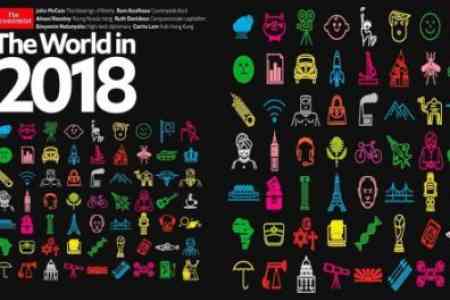 ArmInfo. The Economist writes: "I BELIEVE that one person must not aspire to the reins of power more than twice in a lifetime," Serzh Sargsyan, then president of Armenia, declared in 2014. But the unpopular Mr Sargsyan, whose second (and final) consecutive term as president expired on April 9th, was just kidding. On April 17th the national assembly, stacked with loyalists, elected him as the country's new prime minister. Even many members of the biggest "opposition" group voted for him.

Around 10,000 protesters in Yerevan, the capital, took to the streets before the vote, chanting "Reject Serzh!" Police used tear-gas to disperse them. With hindsight Mr Sargsyan's intentions have long been clear. Constitutional changes he enacted in December 2015, which take effect this month, grant the prime minister nearly all the powers previously held by the president. The amendments also scrapped direct elections for the presidency, ensuring that this post too is occupied by one of Mr Sargsyan's yes-men.

After a decade in power, Mr Sargsyan has little to boast of. The economy, reliant on remittances from Russia, has barely grown. Unemployment is at nearly 20%. Three in ten Armenians fall below a poverty line of $2.90 a day, more than in 2008. The borders with Azerbaijan and Turkey are closed. Foreign investors are deterred by corruption. Oligarchs control the main industries, Mr Sargsyan among them.

The new prime minister has a three-pronged agenda. First comes economic integration with the European Union, Armenia's second-largest trading partner after Russia. On April 11th the national assembly ratified a "partnership agreement" committing to more regulatory harmonisation with the EU. Second is stemming depopulation. Around 300,000 Armenians, fully 10% of the total, have left the country since 2008. Last year Mr Sargsyan set a target population of 4m by 2040. The last prong is making Armenia an information- technology powerhouse.

These goals are not particularly realistic. The partnership agreement with the EU is a weaker version of an association agreement which Mr Sargsyan turned down in 2013, choosing instead to join Russia's Eurasian Economic Union. The population target entails no concrete proposals. Mr Sargsyan wants to tempt back some of the 7m-10m ethnic Armenians abroad, but it is unclear how many want to return. Armenia's IT sector is the fastest-growing part of the economy, making up 7% of GDP in 2017, but it is mainly known for its cheap labour. And there is tough competition from Ukraine and Romania. Mr Sargsyan's stint in his new job is likely to be underwhelming. Soon, he may come to appreciate the wisdom of his words from 2014.