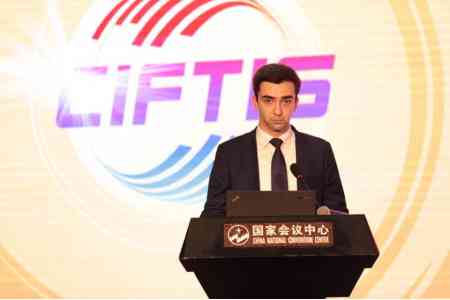 ArmInfo.At present, China is one of Armenia's main trade partners, "Armenian Ambassador to the People's Republic of China Sergei Manaseryan said at the exhibition" Armenia as a gateway to the major markets "exhibition, which was held on May  28 in Beijing as part of the China International Trade Fair for Services.

According to the press service of the Ministry of Economic  Development and Investments of Armenia, according to the Armenian  ambassador, the relations between Armenia and China are dynamically  developing both economically and culturally. As the diplomat noted,  Armenia, as an integral part of the "Silk Road" attaches particular  importance to the initiative "One belt, one road".

In turn, Armenian commercial representative to China Hrant Abadjyan  noted that Armenia is a favorable country for Chinese investments,  since the republic proclaimed an "open door" policy for investments.  He also stressed that Armenia is the gateway to access major global  markets and enjoys preferences for exporting products to the  countries of the EAEU, the EU, the GSP system and the Iranian market.

Within the framework of the exhibition the tourist potential of  Armenia was presented. A Memorandum of Understanding was also signed  between the State Committee for Tourism of the Ministry of Economic  Development and Investments of Armenia and the Committee of Tourism  of the Province of Tsiengsu of China.