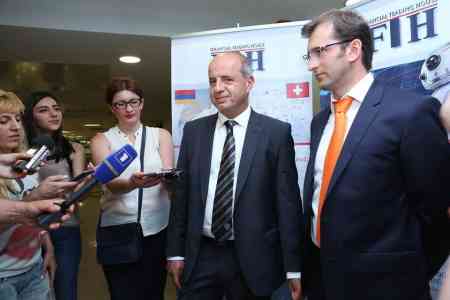 ArmInfo. FTH (Financial Trading House), which provides rental of robots for the management of trading accounts, is the partner of the Swiss online bank Swissquote in Armenia. This was announced during the meeting with journalists on July 2 by the director of FTH, Angin Ghukasyan.

She explained that the rental of robots is an innovative product in the banking market, which provides passive income in the amount of 4% to 8% a month, earned on the game in the international financial markets due to fluctuations in exchange rates, prices of commodity exchanges, In this case, the commission for renting the robots themselves, which will work 24 hours a day for 5 days a week, will be from 0.4% to 0.8% of the deposit amount. "The established goal of the work of the robots is to increase the client's income,"  Ghukasian stressed.

In order to become a Swissquote Bank customer, you need to have an account in the Armenian bank for at least 3 thousand francs / dollars / euro, which should then be transferred to your own account in a Swiss bank, after which the FTH robots will take over the entire technical spectrum of services. Clients of Swissquote Bank can become individuals or individuals, who have reached adulthood, who comply with the requirements of Swiss law. "Robots will work, not allowing your money to sleep while you sleep," she added.

This program, according to the director of FTH, connects to customer accounts on the VPS (Virtual Private Server) server, which is provided with round-the-clock Internet, in order to guarantee the uninterrupted functioning of the robot. In the event that the bank defaults, the FIMNA Swiss Financial Market Supervision Service, according to Swiss law, will transfer up to 100,000 francs to each customer's account.  Moreover, as Ghukasian put it, soon the activity of robots will be insured by the London company DUAL, the reinsurance of which will be incurred by the Armenian Insurance Company, whose name the head of the FTH has not yet called.

She noted that the development of the program lasted for three years.  "We have come a long and difficult journey. It is difficult to gain confidence when dealing with the movement of financial resources, "A.  Ghukasian noted. In this vein, she said that in a year and a half the number of clients has already exceeded 100 people, who are not only residents of Armenia, but also citizens of Austria, Russia and Iran.

Swissquote Bank is a Swiss online bank that has about 300,000 customers from all over the world. The activity of the bank is controlled by the Financial Market Surveillance Service of Switzerland - FIMNA.  FTH (Financial Trading House) was founded in 1999 and has become one of the leading companies in the global financial market. Since 2015, the company provides intermediary services to the Swiss bank Swissquote Bank.