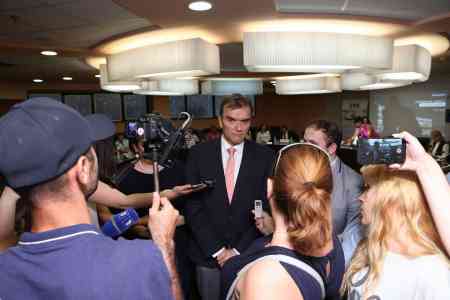 ArmInfo. "The news on the launch of Swissquote Bank in Armenia will spread rapidly across Switzerland, and I believe  the interest of Swiss investors in the Armenian arket will raise, which will have a snowball effect," Ambassador Extraordinary and Plenipotentiary of Switzerland to Armenia Lukas Gasser told journalists on July 2.  He stressed that this will improve the already warm relations with Armenian partners. "Armenia is a favorable country for the financial services sector, and recently we have implemented many investments in the Armenian economy, and are pleased with the process," the Ambassador noted. Moreover, the investment activity of Swiss entrepreneurs in Armenia, according to L.Gasser, is developing not only in the financial sector, but also in pharmaceuticals, watch production, etc. "The entrance of Swissquote Bank in the Armenian market will further deepen our cooperation," he concluded.

To note, FTH (Financial trading house) company became the official representative of one of the largest Swiss online banks Swissquote Bank in Armenia, which serves about 300 thousand customers from all over the world. FTH, founded in 1999, has become one of the leading companies in the global financial market.  Since 2015, the company provides intermediary services to the Swiss bank Swissquote Bank.  According to the National Statistical Service of Armenia, the foreign trade turnover between Armenia and Switzerland in 2017 amounted to $ 366.8 million with 3-fold annual growth. In particular, exports increased 3.6-fold to $ 269.4 million, with imports increasing 2.1-fold to $ 97.4 million.