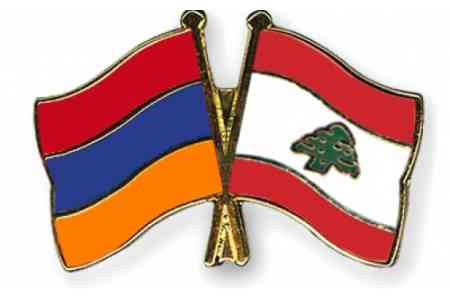 ArmInfo. Minister of Economic Development and Investments of Armenia ArtsvЄ Minasyan received the Ambassador of Lebanon to Armenia Maya Dagher on July 17. The parties discussed issues of increasing the volume of bilateral trade.

According to Minasyan, despite the growth of trade turnover, the  existing level of economic relations is significantly inferior to the  level of political and cultural relations. He noted the potential for  growth of bilateral economic ties.

Artsvik Minasyan presented the economic reforms planned in Armenia,  touched upon the issue of improving the investment and business  environment. He also spoke about the privileges of cooperation with  Armenia in the context of entering the markets of the EAEU and the  EU. Maya Dagher noted the interest of the Lebanese business in making  investments in Armenia.

The sides also stressed the importance of mutual visits of  delegations of business circles of Armenia and Lebanon in the context  of strengthening business ties.