Rating-Agentur Expert RA Gmb confirmed at `BB-` the ratings of  Armenia. The rating outlook is stable 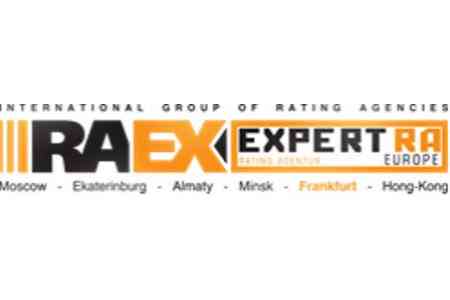 "The confirmation of Armenia's ratings at 'BB-' with a stable outlook  is underpinned by a strong and resilient banking sector, consistent  and solid economic growth, effectiveness of the monetary policy and  improving fiscal consolidation efforts by the authorities. However,  the creditworthiness of the sovereign remains constrained by high  levels of financial dollarization, elevated government debt levels  and high exposure to potential external shocks given the country's  high dependence on remittances, imports and commodities' exports.  Moreover, even though we consider that the recent political turmoil  will not have a material impact on the long-term creditworthiness, it  could hurt investor confidence adversely affecting investment in the  economy", Hector Alvarez, responsible expert, Rating Associate of  Rating-Agentur Expert RA GmbH considers.

The main factors influencing the ranking are as follows:  Positive  factors:  1. In 2017, the fiscal deficit was 1,5p.p. higher than  expected at 4,8% of GDP due to the utilization of a Russian provided  defense loan. Even though this number was out of target, it still  narrowed as compared to 2016 when the deficit was 5,6% of GDP showing  improving consolidating efforts. Going forward, and given the  introduction of the new fiscal strategy, we anticipate deficits to  reduce below the 3% mark;

2. The banking system remains fairly solid. Capitalization levels in  the country are quite adequate as the capital adequacy ratio was  18,7% as of March 2018 and has remained stable. Moreover, as of the  same date, NPLs to total loans stood at 5,4% showing a continued  reduction for the last two years. Finally, profitability has also  been steadily positive as shown by a ROA figure of 1,4% as of March  2018. Even though the amount of banks' assets to GDP remained  unchanged, we did see an increase in domestic credit up to 58,2% of  GDP in 2017.

3. The structure of the government's debt remains stable as it has  practically not changed since last revision by the agency. As of May  2018, short-term debt accounted for 2,6% of total debt, 13,8% had  floating interest rate and FX-denominated debt remained elevated at  81,8%; nevertheless, this type of debt is mostly at favorable  conditions;

4. Armenia's economy has remained resilient. By end-2017 real GDP  grew by 7,5%, a figure substantially higher than what we previously  anticipated. The strong growth was mainly supported by higher  industrial production, growth in overall trade, a hike in the  services sector and increase in construction. Growth momentum carried  over into 1Q 2018; however, we anticipate positive but lower real  output in 2018;

5. The expansionary monetary policy of the government fueled the  increase of inflation in 2017 slightly by 2.6% in Jan-Dec amid 1%  y-o-y, versus the 4% target of the Central Bank of Armenia (CBA) in  2017. However, it has dipped down to 0,9% y-o-y as of June 2018. The  experts anticipate a reduction in the refinancing rate of the CBA if  this scenario were to persist. In general, the experts see a positive  monetary policy with high credibility and an improved transmission  mechanism which has contributed to the fall of lending rates, causing  investment consumption to grow and the price level to increase.

Restricting factors:  1.The spread between the 10Y U.S. government  bond and the USD-denominated Armenian government bond maturing in  2025 is acceptable at 3,3%;

2. International reserves have been in a rapidly declining trend  since November 2017, despite this, they remain at adequate levels. As  of May 2018, they stood at USD 2 bn which is equivalent to 32,6% of  government debt and they cover short-term debt by more than 11x;

3.GDP per capita in PPP terms is estimated at USD 9,5 th in 2017, a  moderately favorable metric figure as compared to the average of its  regional non-oil dependent (RNOD) peers(Georgia, Kyrgyrstan and  Tajikistan);

5. The quality of the fiscal policy is expected to improve  substantially as a result of the introduction of the new fiscal  framework aimed at improving fiscal discipline and augmenting  flexibility with the aim to absorb potential unexpected shocks. The  new fiscal rule should also keep government expenditures contained  and prepare the authorities to reduce debt if needed;

6. Institutional development in the country remains acceptable as  there are good conditions in the country for business, with a  moderate rule of law and government transparency. Nonetheless,  corruption remains a drag for economic growth.  Negative factors:

1. Government debt increased in 2017 up to 53,5% of GDP and 252,2% of  budget revenues and public debt stood at around 59% of GDP as of the  same date. These figures, however, have remained stable in the  current year: as of May 2018, government and public debt figures have  both declined in absolute terms. This is a positive sign that the  authorities are following their debt management strategy. The experts  of the agency anticipate government debt to GDP to remain below the  55% threshold going forward;

2. The unemployment rate is still high and is estimated to have been  18,9% as of 2017; 3. The Armenian stock market remains highly  underdeveloped. The market capitalization was as low as 2,56% of GDP  showing just marginal improvement for the past six years; 4.  Competitiveness in the economy remains low dominated by oligopolies.  The country's position in the global competitiveness ranking of the  World Economic Forum was 73rd out of 138 countries and the economy  relies heavily on imports.  Stress factors:  1.Financial  dollarization remains high, however, it continues to gradually  decline; loans and deposits in FX were equivalent to 60% and 53,2% of  total loans and deposits respectively as of May 2018 (weak stress  factor); 2. The conflict with Azerbaijan for the Nagorno-Karabakh  remains unresolved and escalation is still a latent risk (very weak  stress factor).  The full report is available at  https://raexpert.eu/reports/Research_report_Armenia_20.07.2018.pdf To  note, in Feb 2018 Rating-Agentur Expert RA GmbH upgraded the  sovereign government credit rating (SGC) of Armenia at 'BB-'  (Sufficient level of creditworthiness of the government) from 'B+'  (Moderately low level of creditworthiness of the government)  both in  national currency and in foreign currency.  Rating-Agentur Expert RA  GmbH upgraded the country credit environment rating (CCE) of Armenia  from 'B' (Moderately low quality of credit environment of the  country) to 'B+' (Moderately low quality of credit environment of the  country) in national currency and foreign currency.