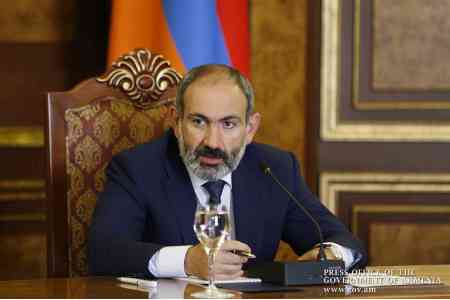 ArmInfo. The Armenian government intends to encourage work as the main means in overcoming poverty. Prime Minister of the Republic of Armenia Nikol Pashinyan stated this on the eve of a meeting with representatives of light industry. According to the press service of the Armenian government, the Prime Minister stressed that light industry is an important branch of the country's economic progress. The Executive Body attaches great importance to opening new jobs and preserving existing ones. "We attach great importance to creating an environment in which people with business skills will be able to fully use their potential without any artificial restrictions, be responsible for their activities, work in equal conditions, in a legitimate atmosphere," the Armenian government's head . He recalled that work is currently underway to amend the Tax Code, and it is important to hear the entrepreneurs' expectations of these changes. At the same time, any business, any company will be free from any corruption obligations.  In turn, the government is taking steps towards opening new jobs, which will allow increasing contributions to the state budget, creating an atmosphere that will provide an opportunity for further growth and development. "Enrich yourself, but legally, enrich the state, people, all, working on equal terms," Nikol Pashinian said. In turn, representatives of the light industry presented their approaches to tax benefits, the terms of customs clearance of imported raw materials, training of personnel, stimulation of local production and exports, growth in production and creation of new jobs.

Touching upon the issue of tax benefits, Nikol Pashinyan stressed that the government is interested in the development and promotion of the industry. But at the same time, an important task remains to fulfill the revenue side of the state budget. "Such issues need to be balanced so that the tax burden on business does not hamper the normal development of enterprises, so that the infrastructure is in working order, so that the roads are repaired," the Armenian government head said, adding at the same time that no proposal will not be ignored or rejected without discussion. Nikol Pashinyan also stressed the need to strengthen secondary vocational schools in the context of training personnel for the industry. He stressed that a number of educational institutions are practically inactive due to personnel, financial and technical problems. "The support of local producers is one of the priorities of our government, and I set the task to increase the volume of local production.It is necessary to form a consumer culture and promote local products." At the same time, given the small volume of the domestic market, we need to develop the country's export potential, "said Pashinyan.