T.Avinyan: The Government is open for cooperation and encourages  active dialogue and interaction in all areas 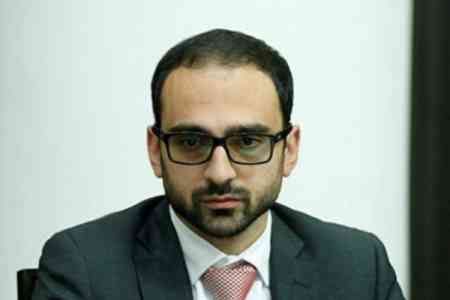 ArmInfo.Participation of numerous companies, investors and experts at Energy Week 2018 indicates a significant interest in the energy system of Armenia,  Acting Deputy Prime Minister Tigran Avinyan announced on November 14  at the opening ceremony of the event.

According to him, Armenia, not possessing its own fuel and raw  material resources, attaches importance to the development of  renewable energy sources. In this context, the development of these  types of generation is one of the priorities of the RA government.  All steps, including improvement of the legislative field, the  forecasted tariff policy and ongoing work with investors, are aimed  at solving this task.

Favorable conditions are created for attracting investments in the  energy sector, as a result of which the security of the energy system  and the level of independence will increase even more.

Tigran Avinyan stressed that Armenia monitors trends in regional  energy processes in order to effectively fulfill the competitive  advantages of the country and establish mutually beneficial  cooperation with the countries of the region. Large infrastructure  projects, the creation of new energy capacities are aimed at solving  the above-mentioned task. From this point of view, the construction  of Iran-Armenia and Armenia- Georgia high-voltage power lines will  continue, their activation will have a positive impact on the  economic development of the country. The government is also taking  steps to gradually liberalize the electricity market. The transition  to a new market energy model will enable large consumers, electricity  suppliers and traders to enter the market, which will create  conditions for increasing the competitive environment and investment.

The transition to a new model will create conditions for interstate  commerce.

The Acting Deputy Prime Minister stressed that the increase in energy  efficiency, which has great potential, is also one of the important  directions of government policy. The solution to this problem is also  seen in such industries as transport, industry, apartment buildings,  state organizations. It is necessary to introduce new technologies  step by step, to expand the energy culture.

The Acting Deputy Prime Minister added that sustainable, smart energy  is one of the most important conditions for the dynamic development  of the economy. It is aimed at improving the lives of citizens and  raising their living standards. "The Government of Armenia is open  for cooperation and encourages active dialogue and interaction in all  areas," Tigran Avinyan said.

To note, on November 14 a three-day investment forum "Energy Week  2018" started in Armenia, which is held under the high patronage of  the RA Government. The event will present prospects for the  development of the country's energy complex, as well as conditions  for identifying existing potential for international cooperation. It  will become a platform for discussing new opportunities and  challenges facing the energy sector of the country. The development  of renewable energy is important to improve the country's energy  security. At the same time, there is a huge untapped potential in  Armenia in solar, hydro, wind and geothermal energy. The forum will  be attended by investors from the UK, Germany, Switzerland, Italy,  Spain, Austria, USA, UAE, who will familiarize themselves with the  country's investment opportunities on the spot. The Forum "Energy  Week 2018" is organized by the Renewable Energy and Energy Efficiency  Fund of Armenia together with the British company Invest In Network  Limited with the assistance of the Ministry of Energy Infrastructures  and Natural Resources of the Republic of Armenia.

Earlier, Armenia adopted the "Concept for Ensuring Energy Security of  the RA ". According to it, by 2020renewable sources will be cover 20%  of all consumed energy in Armenia, and by 2026 - at least 50%.  The  Government plans by 2020 to reduce energy consumption by 38% and,  accordingly, energy costs. All conditions have been created in  Armenia for the installation of solar power plants. According to the  investment program approved by the government of the country, in  Armenia 6 solar stations are planned to be built with a total  installed capacity of up to 110 MW. The total cost of the solar power  plant construction program is $ 129 million.