RAEX-Europe confirmed at `BB-` the ratings of Armenia 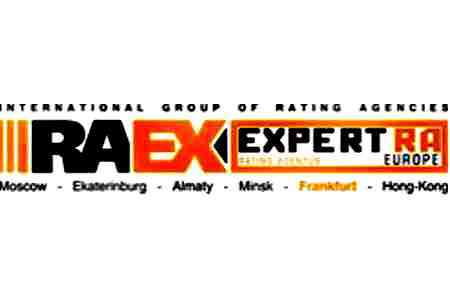 The rating outlook is stable, which means that in the medium term  there is a high probability of maintaining the rating. This is stated  in the official press release of the agency received by ArmInfo.

"The confirmation of Armenia's ratings at 'BB-' with a stable outlook  reflects a well- managed, effective and credible monetary policy,  successful consolidation efforts of public finances, as well as  robust and stable economic growth. Moreover, the structure of  government debt remains quite favorable despite most of the  obligations being of external nature. Also, we consider that the  political risk has been reduced as the new government won by a high  margin in the past December elections.

The rating report, in particular, noted that, on average, the level  of domestic consumption and investment was stable during the whole of  2018.

Moreover, higher copper prices, stable remittances and exports also  contributed positively to growth. However, government expenditures  were lower than anticipated as the authorities held off many planned  expenses as a result of a thorough review of the structure of public  finances. In addition, towards year-end 2018, we have seen  remittances inflow decline, which have hurt private consumption  figures, and also a y-o-y reduction in exports as a result of weaker  external demand.

"As we previously expected, the interim government of prime minister  Nikol Pashinyan maintained economic stability in 2018 all the way  into the snap election where his party obtained the majority of  votes. In this regard, we anticipate political risks to be lower and  investor confidence to have picked up. In general we anticipate  growth to remain robust for the next years under the assumption of  robust external demand, favorable macroeconomic policies of the new  government and low inflation environment."

According to analysts from RAEX-Europe, financial soundness  indicators of the system reflect stability. Financial dollarization  levels in the country have declined for both loans and deposits.   Nevertheless, the banking system remains concentrated as the top-3  banks account for around 41% of total assets.

The Agency continues to assess the structure of the state debt of  Armenia as positive.  First of all, the structure of the government's  obligation has remained nearly unchanged for the past year. As of  November 2018, short-term debt accounted for 2,6% of total debt,  14,3% had floating interest rate and FX-denominated debt remained  elevated at 80,7%; nevertheless, conditions of this type of debt are  mostly favorable.

"Overall, we continue to observe an effective monetary policy. The  level of inflation remained practically unchanged from 2017 to 2018.  This is the most stable the metric has been in recent years.  The  improvement in the credibility of the policy is partly due to the  steps the CBA is taking towards reducing financial dollarization and  the fact that the exchange rate has remained fairly stable.  However,  despite levels having decreased, we still consider dollarization in  Armenia to be elevated.

The budget approved for 2019 already includes the new fiscal rules  the goal of which is to stabilize debt without hurting economic  growth (e.g. issued debt will only be used for capital expenditures  and not current). Also, in the mid-term perspective we still expect  the fiscal policy to be contractionary.

At the same time, we anticipate a substantial revamp of the tax  reform which we expect will spur the development of SMEs and attract  foreign investments. The new policy consists of reducing the profit  and dividend tax rates and increasing sales tax rates to compensate  for the cuts.

External exposure still a source of risk for Armenia. Despite the  fact that Armenia's growth has been solid and the general economy has  been resilient to external shocks, as shown by stable inflation  figures and a solid banking sector, latent risks from abroad remain a  concern for the country.

Armenia's expanding trade deficit, expected at around 13% of GDP in  2018, reflects the country's high dependence on imports. In addition,  remittances and commodities exports are important pillars for the  economy. In this sense, the country can be negatively affected in  2019 as we have already observed price decreases in minerals such as  cooper. Moreover, towards the end of 2018 we have seen a slowdown in  exports of goods and services, as a result of lower external demand  (see graph 7).  Imports have been also increasing at a declining pace  as domestic consumption was modest in 2H 2018. Also, remittances grew  by almost nil y-o-y in 2Q 2018 and they declined by 7% in 3Q 2018.   This contributed to lower domestic consumption and declining  aggregate demand.

Finally, as a result of the new government elected back in December  2018 we do not expect any disruption or deviation in the  Russia-Armenia relations. However, the conflict with Azerbaijan for  the Nagorno-Karabakh remains unresolved and escalation is still a  latent risk".

The full sovereign rating calendar can be found at  http://raexpert.eu/sovereign/#conf-tab- 5