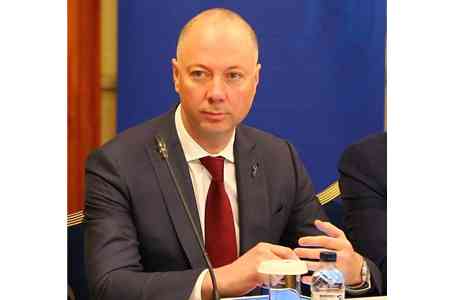 ArmInfo. Interview of the Minister of Transport and Communication of Bulgaria Rossen Jeliazkov with ArmInfo News Agency, where he talks about the prospects for the development of Armenian-Bulgarian relations, about the need to  stimulate trade and economic relations, about the upcoming visit of  the RA Prime Minister to Sofia and many other things.

Mr. Minister, how would you characterize the state of the  Armenian-Bulgarian trade and economic relations, and how do you see  the future of these relations?

As you know, the reason for our meeting is the next 8th session of  the Armenian-Bulgarian scientific, technical and economic  cooperation. The last meeting was in December 2015. Since then, both  Bulgaria and Armenia have not stood in place, developed and achieved  significant results. I was in Yerevan for the last time in 2012 and I  can say that the city has changed a lot, and now it has a rather nice  new look. A change in the urban environment and infrastructure  indicates the functioning of the economy.

An Armenian-Bulgarian business forum is currently being held in  Yerevan. I am very impressed with the activities of your agency. I  participated in the presentation in Yerevan under the same name "Why  should we invest in the Armenian economy?", And I think that right  now our representatives from various areas of the economy, in  particular - light industry, chemistry, pharmaceuticals, information  technology and many other things, will do necessary steps towards the  development of bilateral cooperation. It is impressive that the large  enough room chosen for the meeting of business representatives of the  two countries turned out to be small.

More than 70 companies expressed interest and participated in our  forum, of which more than 30 are Bulgarian. The friendly relations  between Armenia and Bulgaria were laid centuries ago. As my Armenian  counterpart Hakob Arshakyan noted, genetic friendship developed  between us.

Therefore, attention to the business environment in both Armenia and  Bulgaria is very important from the point of view of encouraging  mutual trade. In this area, the situation is still not satisfactory,  with a very strong surplus in favor of Bulgaria. Our goal is to  ensure balance, especially in terms of products with high added  value.

Therefore, we attach such a high value to a data-based economy, the  so-called digital economy, for which time and space do not matter.  However, we also do not lose our attention to the conventional  economy, which relies on logistics - both in terms of air and ground  space.

You expressed dissatisfaction with the level of existing cooperation  between Armenia and Bulgaria. In your opinion, what is the main  reason, or what impedes the stimulation of our bilateral relations in  the trade and economic field?

First of all, it is a communication problem. The Black Sea separates  us, and the main transport corridor passes through the ferry crossing  of the Bulgarian Varna, the Ukrainian Black Sea (formerly   Illichivsk), the Georgian Poti. This is the main destination for the  transit of goods to Iran and the Far East. This is the transport  corridor that we will need to develop and expand in the future.  Therefore, it will be very important to have decisions regarding  various international organizations, one of which is the Black Sea  Economic Organization.

At the same time, this is also the development of such initiatives as  the multi-modal corridor "Persian Gulf - Black Sea", and, of course,  these are goods and services that will move along these corridors.  Therefore, all formats at the governmental and non-governmental  levels, such as, say, this forum, are important because they allow  you to create partnerships, and above all between companies. In  addition, it is an important indicator for governments that could  encourage this particular activity. I mean barter, of course.  It was  pointed out the advantage of Armenia in investment and investment, as  well as Bulgaria - as a member of the European Union.

We had excellent relations at the political level, good relations at  the intergovernmental level, as well as between such entities as the  Bulgarian Agency for the Encouragement of Small and Medium-Sized  Enterprises and the Armenian Agency "Business Armenia" on the other  hand.

During my meeting with my Armenian counterpart Arshakyan, we  discussed issues related to the infrastructure and information  technology sector, these are also funds that the EU envisages for the  implementation of the Horizon Europe project for 2021-2027 with a  cost of 100 billion euros. And you need to take advantage of both  sides in the field of expertise, knowledge and artificial  intelligence. We familiarized with the achievements of Armenia in  this field.

I also understand that there will be structural changes in your  government in support of this policy and I believe that this is the  right direction. Future economies are data and digital based  economies. The world is developing rapidly, and we, as small states,  should not lag behind global trends.

What are your expectations from the meeting of the Armenian-Bulgarian  intergovernmental commission and business forum in Yerevan?

On the one hand, we expect direct and specific contacts between  partner companies on both sides, on the other hand, we need to go  beyond the personal presence in this forum and within the framework  of employers' organizations. And since at this forum the Association  of Industrial Capital of Bulgaria (AICB) and the Association of  Employers of Bulgaria are represented, messages about the results of  this visit to Armenia will be reached by hundreds of companies within  the association. In addition, in Bulgaria there is a serious interest  in the labor migration process. The relevant ministries of our  countries have already signed an agreement on the regulation of labor  migration, which allows Armenians with the necessary labor  qualifications to take advantage of the Bulgarian labor market, which  is a guarantee of close contacts between the two states.

According to the National Statistical Committee of Armenia, the  foreign trade turnover of Armenia with Bulgaria for January-December  2018 reached $ 259.1 million, which is 23.8% lower than the previous  year's level. According to experts, the low activity of the  intergovernmental commission largely contributed to the decline. Are  the dates of the new meeting defined, and what issues are envisaged  to discuss?

Is this true? We will understand in the future. If in 2018 positive  changes are recorded, we will be convinced of our cooperation.

These formats are very important, as the business comes to where  there are investment opportunities and benefits. In a market economy,  there is no mechanism for governments to control these investments  and processes. Therefore, the interest shown is evidence of potential  in both markets, as well as a stable market environment in both  states. This is also evidence that Bulgaria is seen as a bridge to  the West, and Armenia to the East.

As for the next meeting of the intergovernmental commission, this  issue will still be discussed, but we intend to hold it no later than  two years later, that is, approximately in 2021.

Of course, there are other formats in which we discuss our bilateral  issues. The Prime Minister of Armenia will pay a visit to Bulgaria  soon. This visit is a good opportunity to discuss issues on our  bilateral agenda and vivid evidence of the high level of political  relations between the two countries.

Bulgaria is one of the active participants in the TRACECA project.  What projects does Sofia intend to propose to activate this program?

TRACECA is a project that provides communication between Europe and  Asia, and through the Caucasus - this is governed by an agreement  between the countries participating in the project, as well as the  goal and its step-by-step engagement. At the upcoming investment  forum, Bulgaria will present two projects, in particular, related to  the railway infrastructure on the Bulgarian territory (Varna-Rusel  and Karnobat- Sindel) and the second project concerns the connection  between the Danube River and the Black Sea, which is an essential  part of the European transport system.

A few days ago, an agreement was signed in Tehran to create the  Europe-Armenia-Iran-Qatar Internet.  Do Bulgarian companies intend to  take part in this project?  I also co-chair the Bulgarian-Iranian  Intergovernmental Commission on Economic Cooperation. At the upcoming  session with Iran, which is scheduled for next month, this issue will  also be discussed. In the context of building better communication,  such initiatives are of great interest, especially in the field of  high-speed networks, which is, on the one hand, the guarantor of  accelerated data exchange, on the other hand, it assumes and provides  the best cyber defense.