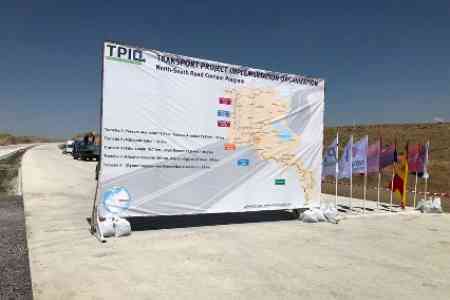 ArmInfo. Construction activities within Tranche 2 of the North-South Investment Corridor (in the Ashtarak-Talin section, about 42 km) have been suspended due to a conflict with the constructor. Minister of High-Tech Industry Hakob Arshakyan announced this in an interview with journalists on June 13 after a government meeting.

According to the Minister, today negotiations are underway with the general contractor of Tranche-2 by the Spanish company Corsan Corviam Construccion S.A. in order to solve the problem. As for the Construction activities carried out by the Chinese company Sinohydro Corporation in the framework of Tranche - 3 (Talin-Lanjik, Lanjhik-Gyumri, 46.2 km), they, although with some delay, but still continue.  As Arshakyan pointed out, at present the Armenian government is negotiating with the goal of attracting funds for the construction of the southern segment of the investment corridor.

Earlier ArmInfo reported,the Spanish Corsan Corviam Construccion S.A. company the contractor for the tranche-1 and tranche-2 for the construction of the North-South transport corridor,  received payment from the state for the work, however it did not fulfill its obligations to 17 subcontractors. They demand to pay companies for the work done in the amount of 2  billion 49 million drams (from August to November last year).  According to the participants of the action, the company says that  the money must be paid by the government, while the government says  that it has already paid. According to the deputy minister, the Spanish company has financial  difficulties and is at the stage of bankruptcy. It is noteworthy that  the company's financial difficulties did not appear today or  yesterday, for 2 years the general contractor of the first two  tranches has been in the process of bankruptcy.  Throughout 2018, the  company continued construction work, and the Armenian government  continued to pay money. And only this year there was a disagreement  with the company on a number of points - both in connection with the  terms and volumes of work, and the size of payments. "Following the results of the new engineering measurements, it turned  out that we cannot pay them the amount they are counting on," he  said. The government of Armenia, as he pointed out, is trying to resolve the issue through negotiations. Today it is already known  that construction work within Tranche-2 will not be completed on time  - by the end of July this year.  Nevertheless, the Ministry of  Transport of Armenia does not want to terminate the contract with the  Spaniards and is ready to continue cooperation if the negotiations  "take place in a normal, constructive way." "If we terminate the  contract, then we will face a long arbitration process and we will  have to postpone work for several years," he explained.  To recall, the loan agreement under Tranche 2 was signed on May 30, 2011. The general contractor is Spanish Corsan Corviam Construccion S.A., the contractual cost of construction works is $ 179.6 million, the lender is the Asian Development Bank ($ 170 million). Sinohydro Corporation, ADB lenders (Talin- Lanjik, $ 100 million) and the European Investment Bank (Lanjik-Gyumri 60 million euros) acted as the general contractor of Tranche-3 (Talin-Lanjik, 18.7km and Lanjik-Gyumri 27.5 km). The Artashat-Agarak project (about 346 km) will be the fourth section of the North-South project (Artashat-Kajaran 30.4 km, Kajaran-Agarak 42 km). Within the framework of the project, it is planned to rebuild the arterial roads of Armenia from the Iranian to the Georgian border. Partially they will be rebuilt from asphalt to concrete, partially expanded. And in some areas they will build straight stretches instead of roundabout turns in the mountains. The construction of the Kajaran-Agarak site is funded by the Republic of Armenia and the Eurasian Development Bank, and the Eurasian Development Fund. The total cost of the project is $ 184.7 million, of which $ 150 million is credit funds.

The project to build a North-South transport corridor with a total  length of 556 km will allow access to the Black Sea and European  countries through Armenia  (Meghri-Kapan- Goris-Yerevan-Ashtarak-Gyumri- Bavra) and Georgia. The  investment program is aimed at providing communication of the north  (border with Georgia) and southern Armenia (border with Iran) through  transport communications that meet high international standards, and  access to world markets. Construction of the corridor was planned to be completed in 2019.  Meanwhile, on September 4, 2017, at a meeting with journalists, former Minister of Transport, Communications and Information  Technologies of the Republic of Armenia Ashot Hakobyan stated that  the implementation of the investment program for building the  North-South road corridor can take from 5 to 10 more years.  According  to him, the timing of the project will depend on the financing, pace  and quality of the work. According to the former minister, the  construction will cost $ 2 billion, since only its southern section,  between the cities of Artashat and Meghri, according to preliminary  estimates, will cost about $ 1.5 billion. . 7 years ago, in September  2012, when the start of construction of the highway was announced,  the amount that representatives of the Armenian government called was  more than half as less - $ 962 million.