Artur Atoyan: Problems of fish farmers are solved by the communist  method, that is, they are not solved at all 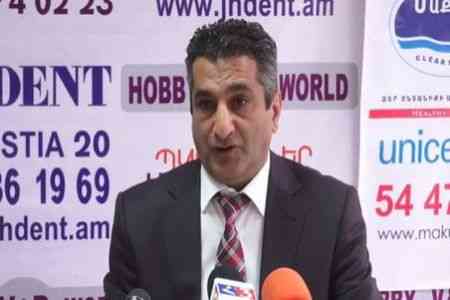 ArmInfo.The fishing industry in Armenia after the decline in revenue from 2014 to 2016 began to recover only in 2017, increasing turnover by 9.8%. In 2018, the  growth rate of gross output of the Armenian fishery sharply  accelerated to 26.2%, ensuring revenues in the amount of 36.6 billion  AMD.

Despite the positive trends recorded in the country's statistical  data, fish farms still face problems raised by the Union of Fish  Farmers of Armenia, however their reports, according to its chairman,  have not been considered by the authorities so far.

The organization has been operating in the country for more than 10  years, but for the recent two years it has been conducting  activities, guided by a new strategy, which, in particular, implies a  change in the format of work. Such innovations, according to the head  of the Union of Fish Farmers of Armenia, are in no way connected with  the velvet revolution, but have become a necessary measure to ensure  that the work of the organization remains efficient. The head of the  Union, Artur Atoyan, in conversation with ArmInfo's correspondent  tells about the reasons for such changes and the problems that local  fish farmers face.

-Mr. Atoyan, could you tell in more detail what is the basis of  innovations in the activities of the organizations you are talking  about, and what caused the need to develop a new strategy?

The Union' strategy, in fact, has changed a lot. From now on, we  provide professional assistance, in particular, free consulting and  legal services, only if we are asked for help, while earlier, seeing  certain risks, we beat our breasts, warned, offered our solutions.  There have been even situations when our proposals were submitted to  the government without any mention of us. And now for already 2 years  we have changed the format of activity. Now we feel that our status  is more tangible. We are ready to cooperate with all who need our  help. But at the same time, the Union of Fish Farmers does not  cooperate with donors, does not participate in any grant programs,  because we should respect ourselves and not be influenced by  sponsors. After all, by and large, grant programs make abandon own  interests, business interests and even the country.

-But the power has changed, and today we live in the conditions of a  new reality

In fact, today's government is committed to the people and is trying  to implement measures aimed at democratic change. But how they  succeed in this depends, among other things, on us - how much we will  help to fulfill all these goals. Nevertheless, I must say that the  current government, after all, has inherited certain features of the  previous authorities. For example, the style of response to written  appeals that do not give the problem a solution. Being also the  chairman of the Union for Consumers and Producers' Rights Protection,  I sent a written appeal regarding the settlement of the issue of  providing water to 22 citizens living in one of the elite houses,  which, by the way, are included in the development program of  Yerevan.

For the past 7 months, 4 departments, including the Ministry of  Energy, Yerevan Municipality, the State Committee for Water  Management, cannot resolve this issue by transferring papers from one  department to another, in other words, "palming off" the problem to  each other, which resembles a vicious cycle.

- Has the nature of the problems at fish farms changed in 10 years of  activity of your organization?

The fact is that today the problems of fish farmers are solved by the  communist method, that is, they are not solved at all. Those, who  carried the consequences of these problems <acquired immunity> and  stood up in these conditions. And in today's realities, the problems  were independently solved. Most of them have become somewhat safe for  fish producers. In particular, "immunity" increased with an increase  in the market price of fish, which was a consequence of European  sanctions against the Russian Federation and tense economic relations  with Turkey. Since our main competitor in the Russian market is  European and Turkish manufacturers. When they dropped out of the  Russian market, all the problems that were in the sphere of fish  farms in Armenia became solvable. Since the business has become  profitable.

However, this can have a short-term effect..

Yes, that's why I made a statement about the need to diversify  markets for fish products. Today, we export about 80% of production,  and only 20% are consumed in the domestic market. And about 90% of  the export of fish and fish products of Armenia is supplied to the  Russian Federation. And here it should be noted that Armenian fish  products are always in high demand there. Even with an increase in  production, fish farms should not worry about marketing, since there  are no problems with the sale of products and they are not expected.  Although, by and large, this is a myth, because we depend on one  market, and naturally this contains high risks. After all, if there  are any problems with the Russian side, then we will face a situation  that took place from 2014 to 2016 - which means liquidation prices,  the collapse of fish farms, etc.

-How, by the way, does the situation develop with fish farms today?  Is their number growing?

Today 120 fish farms operate in Armenia.  You know, their number simply cannot increase, since the Ministry of  Nature Protection does not provide new permits for water use.  Production volumes are increasing, but not the number of fish  farmers. And this is quite a profitable area, and there is a high  interest in this industry.

For example, today, due to past minor shortcomings and mistakes, the  Ministry of Nature Protection deprived 4 large enterprises of water  use licenses that could attract several million dollars in  investments in the RA economy and open from 20 to 80 jobs. And the  National Water Council does not provide new permits. I think the  problem, by and large, lies in the fact that the National Council  does not include a person representing the business sector. And for  about 4 months, the government is as silent as a grave.

- And what about production volumes?

As I have noted, production is growing. But, taking into account the  experience of the previous authorities, fish farmers sometimes do not  want to declare their income, because earlier, with an increase in  revenue, the government forced them to make some investments,  introduce new technologies, etc.

- Mr. Atoyan, nevertheless, let's return to the issue of  diversification of sales markets, what is your assessment? Where  should we direct production? Where do you see the potential of  unrealized opportunities?

Officials participate in various international symposia, gatherings,  meetings, but all this is in vain, since we continue to remain in a  closed information environment. And in part, it is even good that the  agricultural department has forgotten about us, because when they  remember, they come up with illogical and meaningless proposals.  Today the fish farmer himself solves his own problems.