Head of PSRC: Whatever the agreement, the domestic tariff is  dependent on the price at the border 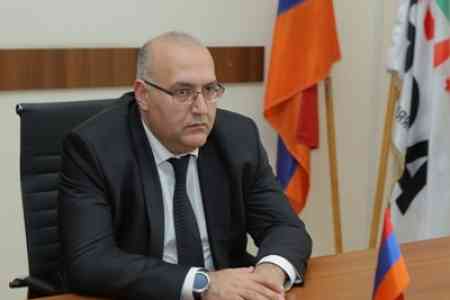 ArmInfo. From January 1, 2019,  the price of Russian natural gas for Armenia was increased from $ 150  to $ 165 per thousand cubic meters. But this is the price "at the  entrance" to Armenia, and the internal tariff for the population has  remained the same.

How long it will be kept is the subject of almost  annual, very "stormy" negotiations between Moscow and Yerevan. The  Armenian authorities periodically note the "constructive" approach of  the Russian side, and experts believe that Moscow is not ready to  lower the price. To understand the situation, ArmInfo talked to the  direct participant in the negotiations - the Chairman of the Public  Services Regulatory Commission (PSRC) of Armenia Garegin Baghramyan.

Mr. Baghramyan, experts and media have consistently stated that the  rise in price of "blue fuel" is inevitable for the population of  Armenia, the only question is how much will it rise. Yesterday the  media already reported that the Russian authorities intend to  increase the price of gas for Armenia by 30%, which was repeatedly  hinted to the Armenian side. One way or another, the deadlines are  running out, and from January 1, 2020 we can face the fact.

I am not aware of such a decision. The negotiation process is quite  complicated. Yerevan made a concrete package of proposals, which is  still being discussed by Moscow. In any case, the duration of the  additional agreement to the contract for the supply of gas to Armenia  (signed between Gazprom's head Alexei Miller and Armenian Deputy  Prime Minister Mher Grigoryan on December 31, 2018 - ed. note)  expires by the end of the year, and from January 1 next year it will  be necessary to determine the gas tariff for the population.  Indeed,  from the first of January of this year, when the tariff for Russian  gas at the border amounted to $ 165 per thousand cubic meters, the  5-year agreement between Yerevan and Moscow, which was based on the  price of $ 150, ended. Therefore, during the Armenian-Russian  intergovernmental commission, it was decided to develop a new  agreement, thanks to which it will become clear to the parties how  the tariff policy will be formed in the long term, and which will set  the average gas price for the end consumer.

Today we have an average tariff of $ 255 (of which $ 45 is VAT), 5  groups of beneficiaries have been identified for which different  price categories have been set, for example, for areas such as  processing industry, greenhouse farms, a tariff of $ 211 has been  set, socially disadvantaged groups of the population paid $ 100.  There are countries where, for example, the price for the population  is kept at a low level, but for the industrial sector it is high. It  is also possible that, for example, a decision will be made to  establish a single tariff for all - in the amount of the indicated $  255.

The new agreement, as the Armenian side expects, will reflect the  results of loss reduction, cost optimization and staff reduction.

In parallel, an investment scheme is being discussed in the entire  gas supply system until 2030, which implies huge investments. As a  result, these investments should lead to a reduction in losses, and,  as a result, will prevent increase of the tariff.

- And who will pay for the difference of $ 15, formed in 2019? Could  the question arise about subsidizing by the government, as it was  already done in 2013, or "buying off" in the form of donation of  certain industrial facilities to the Russian Federation?

- No. There should not be such a question. Gazprom Armenia continues  to compensate for the difference in tariff formed as a result of an  increase in gas prices at the border since January 1 of this year at  the expense of domestic savings. In this context, there is no need to  worry, because the state does not accumulate debts and in the future  will not "owe" to Gazprom and will not be faced with the need to  somehow subsidize or somehow cover the debts.

Predicting your next question - and if there were savings, why didn't  you lower the tariff earlier, I'll answer that until January 1, 2019,  by the agreement of 2013 ratified by the Armenian parliament and  having the force of law, provisions were established that almost  limited the authority of the PSRC. That is, a specific tariff was  fixed, because of which, regardless of the gas price at the border,  from a certain period this tariff for the end consumer will be  unchanged. Based on this, the result was formed, the savings that  Gazprom Armenia uses today to compensate for the difference in  tariffs and does not apply to the PSRC to raise prices for the  domestic consumer.

Having abandoned the restrictive provisions of the previous  agreement, we hope that the PSRC, within its powers, will be able to  make calculations and, based on the current methodology and, if  possible, reduce the gas tariff. The new agreement will enable  Yerevan, in the event of lowering energy prices on the international  market, to come up with a proposal to lower prices for Armenia.

In addition, we should remember that the agreement of 2013 assumed  that on the basis of the investments of the Russian Gazprom and as a  result of the agreed model, the norm of 9% profitability should be  ensured. To this day, the provision has not been valid due to the  lack of an agreed model.

"Nevertheless, the year is coming to an end." Do you, as a  participant in the negotiations see  the desire of Moscow to meet  Yerevan?

I can only say that we have a very constructive and friendly dialogue  with Gazprom Armenia. We are waiting for the reaction of Moscow. When  a decision is made, Gazprom Armenia will request a revision of the  tariff for the domestic consumer; PSRC will consider it within 80  business days. Then the tariff will be determined from the date of  completion of the specified 80 working days and will enter into force  after 30 days.

In the absence of a new interstate agreement, if Gazprom Armenia  applies to the PSRC with a request to revise the tariff upwards, a  calculation will be carried out within the framework of the procedure  established by the Law on Energy, and the average price will be  obtained. Then, based on the current tariff policy, consumer groups  and the corresponding tariff for them will be determined. If there  are reasonable calculations, we can refuse to review with the aim of  increasing. In any case, it must be remembered that whatever the  agreement, the domestic tariff is dependent on the price at the   border.