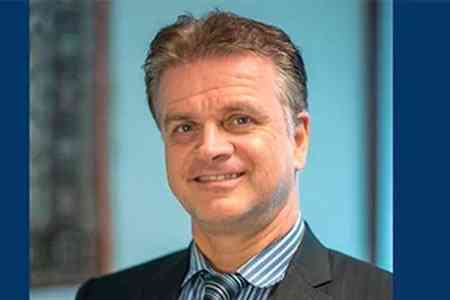 ArmInfo. On October 18, Minister of Finance of Armenia Atom Dzhandzhigazyan received a delegation led by a member of the Board of Directors of the Asian Development Bank (ADB) Shivaji Kshatrapata and Director General of the ADB Central and West Asia Department Werner Lipaki.

According to the press service of the Ministry of Finance, the  parties discussed the prospects for expanding programs implemented in  the public and private sectors. The main directions of the  partnership strategy were discussed, which reflected the prospects  for expanding opportunities aimed at economic development, improving  the efficiency of public administration and capacity development.

The interlocutors also touched upon the development of a sectoral  strategy of the RA government and its harmonization, as a result of  which the range of programs implemented jointly with ABT will be  clarified.  In this context, ADB representatives noted the importance  of proper preparation and implementation of programs in the fields of  agriculture, infrastructure, health, education and energy.

Atom Dzhandzhugazyan noted the importance of cooperation with ADB.  According to him, this interaction is essential in implementing  reforms in the republic in a number of areas.  Shivaji Kshatrapaty,  in turn, praised the achievements of the RA government, in  particular, in terms of ensuring a stable fiscal environment and the  issue of Eurobonds.  Armenia joined ADB in 2005 and is part of a  group of countries with mixed (concessional and conventional)  financing. ADB works to reduce poverty in the Asia-Pacific region by  stimulating economic growth and regional integration. In the field of  transport, ADB continues to assist Armenia in the construction of the  North-South transport corridor, as well as in strengthening transport  links between cities with high poverty levels. According to  statistics on the bank's website, at the end of 2017, ABR implemented  52 projects in Armenia for a total of $ 1.32 billion, of which $ 635  million was allocated for the development of transport  infrastructure, $ 172 million for urban infrastructure and water  supply, $ 152 million for finance, $ 142 million in energy, $ 140  million in administrative management.