Minister: The Russian side has doubts about the country producing  blue cheese 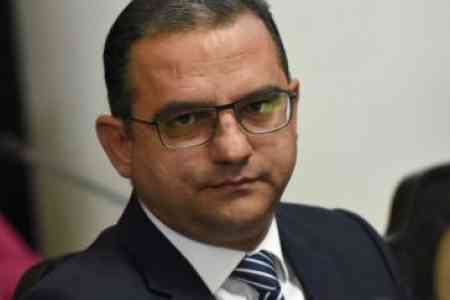 ArmInfo.The Russian side had doubts about the country producing blue cheese, as a result of which 21 tons of blue cheese produced by the Armenian company Spayka  in its own enterprise were not allowed on the Russian market. This  was announced on November 8 by Minister of Economy Tigran Khachatryan  during a meeting of the Permanent Parliamentary Commission on  Regional and Eurasian Integration.

According to him, the government works with manufacturers and  exporters on a daily basis. On behalf of the Prime Minister of the  Republic of Armenia, together with the State Revenue Committee, daily  work is being carried out with Russian partners at the Upper Lars  checkpoint. As a result of this work, numerous problems of Armenian  exporters, including the Spayka company, were solved.

In particular, earlier 15 tons of Armenian cheeses were allowed on  the Russian market, which actually did not go through the inspection  process. This time, it was decided to carry out a detailed search,  which revealed that the Armenian blue cheese was sent to the Russian  Federation without documents proving the country of origin.  The  Minister recalled that the Russian Federation has a sanctions regime  on goods produced in countries subject to sanctions, and Russian  customs officials have doubts. The Armenian side, in turn, turned to  its Russian partners with a request to skip the goods as an  exception, to which a message was received stating that the rules of  the procedural examination must be met, and this period is 3 working  weeks.

Tigran Khachatryan noted that the Armenian side has not yet received  documents from Russia, only after familiarizing themselves with their  contents it will be possible to discuss the problem.  In turn, the  chairman of the parliamentary commission, Mikayel Melkumyan, recalled  that the nearest laboratory is in Nalchik, 130 km from the Upper Lars  checkpoint. He suggested that the minister discuss the issue with the  Russian side, so that the corresponding laboratories are available at  the checkpoint itself.  This, according to the MP, will help to avoid  many misunderstandings at the border.

Earlier,ArmInfo reported, that after 24 days of downtime at the Upper  Lars checkpoint, without a written expert opinion, Russian customs  officers returned cars with 21 tons of blue cheese produced in  Armenia. The largest transport and logistics company of Armenia  Spayka LLC reports on its website.  Blue cheese is a new product of  "Spayka" company, which in its technological conditions and quality  is fully consistent with the products of the best European cheese  makers. The enterprise was opened at the beginning of the year in the  presence of the Prime Minister and the Ambassador of the Russian  Federation to Armenia.  Over 15 million euros were invested in its  creation.  As ArmInfo previously reported, in order to expedite  customs operations, the company timely provided customs officers with  all the necessary documentation, including veterinary certificates,  technical production conditions, etc. To make it even more convincing  that the cheeses were actually made in Armenia, the company even  provided video materials on the official opening of the enterprise  for the production of blue cheese in the presence of the Prime  Minister and the Russian Ambassador to Armenia. The company hoped  that Russia would become one of the main markets for this product  under the conditions of the EAEU common customs space and with  anti-sanction measures that severely restrict the import of  high-quality European cheese into Russia and the import substitution  policy declared by the Russian Federation within the framework of the  trade union.  In the opinion of Armenian experts, it seems that  Armenian producers of products cannot be guided exclusively by the  markets of the EAEU and, first of all, Russia with its unpredictable  approach even to partners in the Union. Thus, according to  head of  the Export Armenia Association of Experts Emil Stepanyan, such  behavior undermines, discredits the very idea, the essence of the  EAEU as such. He believes that the inadmissibility of Armenian cheese  on the Russian market is warning for the whole of Armenia, it is a  simulation of the situation of a complete ban on Armenian exports to  the Russian Federation. "We need to think on a national scale about  stimulating exports to third countries - the EU, China, the USA,  Africa, the Middle East," he emphasized.  At the same time, as stated  earlier in parliament,  head of the commission on regional issues of  Eurasian integration Mikayel Melkumyan, members of the commission   traveled to the Upper Lars checkpoint, during which they identified   a number of problems, including administrative ones.