EEC Minister: Eurasian Economic Commission will study the letter of  the Armenian "Spayka" company on the export of cheese to Russia  through the "Upper Lars" checkpoint 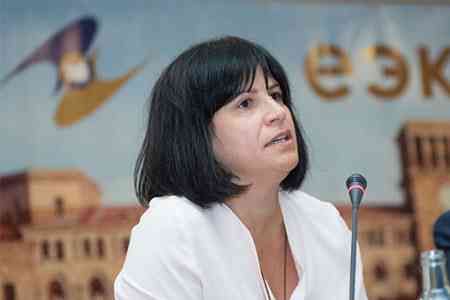 ArmInfo. The Eurasian Economic Commission will study the letter of the Armenian "Spayka" company on the export of cheese to Russia through the "Upper Lars"  checkpoint. Karine Minasyan, Minister for Domestic Markets,  Informatization, Information and Communication Technologies of the  Eurasian Economic Commission, told reporters on November 12, on the  sidelines of the international Anti-Counterfeiting-2019 international  forum opened in Yerevan.

According to her, the letter was received two days ago. In this case,  the Minister continued, the main problem is the origin of the cheese,  for which it was necessary to obtain an opinion from the Russian side  and to understand on the basis of what facts it was concluded that  the cheese was not of Armenian origin, to understand what laboratory  tests were carried out. After that, these studies will need to be  compared with the conclusions of the commission in order to  understand whether cheese is of Armenian origin or not. The EEC  Minister emphasized that the implemented risk-based assessment system  has fairly objective reasons for cars to stop and carry out  inspections. "If business entities believe that their rights have  been violated, they can sue for compensation, but it's important for  us to understand the essence of the problem," Karine Minasyan  emphasized.

She also noted that the objective problem of the "Upper Lars" is  technical and is related to throughput, which is limited to 300 cars,  while the car flow at the checkpoint today is three times more. The  subjective problem is related to the issue of trust, which should be  between the customs services of the EAEU countries. "It is necessary  to come to the point that the Russian customs did not check goods and  pass the car through the seal of the customs service of Armenia, and  for this it is necessary to introduce mechanisms so that there is  confidence at the border that the products are legal," Karine  Minasyan concluded.

On November 7, ArmInfo with reference to the Spayka  cargo  transportation company, reported that after 24 days of downtime at  the Upper Lars checkpoint, without a written expert opinion, Russian  customs officers returned cars with 21 tons of blue cheese produced  in Armenia. Blue cheese is a new product of "Spayka" company, which  in its technological conditions and quality is fully consistent with  the products of the best European cheese makers. The enterprise was  opened at the beginning of the year in the presence of the Prime  Minister and the Ambassador of the Russian Federation to Armenia.   Over 15 million euros were invested in its creation. As ArmInfo  previously reported, in order to expedite customs operations, the  company timely provided customs officers with all the necessary  documentation, including veterinary certificates, technical  production conditions, etc. To make it even more convincing that the  cheeses were actually made in Armenia, the company even provided  video materials on the official opening of the enterprise for the  production of blue cheese in the presence of the Prime Minister and  the Russian Ambassador to Armenia. The company hoped that Russia  would become one of the main markets for this product under the  conditions of the EAEU common customs space and with anti-sanction  measures that severely restrict the import of high-quality European  cheese into Russia and the import substitution policy declared by the  Russian Federation within the framework of the trade union.