Avinyan: The issue of building a new copper smelting complex in  Armenia is on government`s agenda 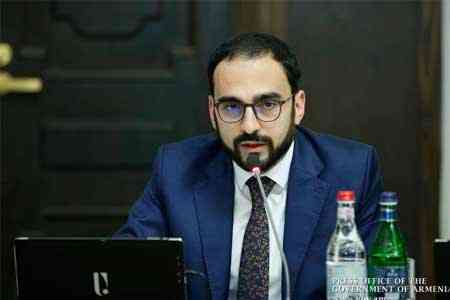 ArmInfo.  The issue of building  a new copper smelting complex in Armenia is on the agenda of the RA  government. This was stated by Armenian Deputy Prime Minister Tigran  Avinyan on November 20 in an interview with reporters.

According to him, negotiations with the Chinese company are ongoing,  and the Chinese company, according to preliminary agreement, is  planning a visit to Armenia. "In general, the issue of building a new  copper smelting complex is on our agenda, since the one in Alaverdi  is inefficient, very problematic from an environmental point of view.  And what is being discussed now has almost nothing to do with prior  practice'', said Avinyan.

At the end of October this year Deputy Prime Minister's office  announced that Citic, a Chinese company, was interested in a project  to build a new smelter in Alaverdi, equipped with new technologies  that would almost completely neutralize emissions, and was ready to  discuss further details. This became known as a result of the visit  of the Armenian delegation, headed by the head of the office of the  RA Deputy Prime Minister Tigran Avinyan, Serge Varak Sisserian to the  Chinese company Citic.

According to the source, it was agreed that in the near future the  delegation of the Chinese company will visit Yerevan to continue  negotiations. To note, Citic or formerly the China International  Trust Investment Corporation is one of China's largest state-owned  investment corporations, which was founded in 1979. The company  conducts activities in the field of financial services, resources,  energy, manufacturing, engineering, real estate, etc.

Meanwhile, in July this year Vallex Group of Companies issued a  statement in which it welcomed the statement of the lawmaker from the  ruling bloc "My Step" Aren Mkrtchyan, made at a parliamentary hearing  on July 19 that VTB Bank was ready to donate to the Armenian state  the property complex of the Alaverdi plant, which was transferred to  the bank as collateral.

It should be noted that the property complex of the Alaverdi smelter  producing crude copper is secured by a VTB Bank loan of $ 380  million, which was granted to the Vallex group of companies for the  development of the large Teghout copper-molybdenum deposit, which was  discontinued due to environmental problems as early as last year  after the suspension of co-financing by one of the foreign lenders.  In these conditions, credit servicing became extremely unbearable for  the group.

Moreover, at the beginning of this year, the blast furnaces of the  Alaverdi enterprise itself were also extinguished due to serious  environmental risks. Previously, the company worked to circumvent  stringent environmental rules through informal agreements with  relevant government agencies to ensure the production and export of  blister copper and to preserve jobs. However, the new government,  worried about risks, set stringent conditions and the company had to  be stopped.

Information appeared on the market that the Teghout copper-molybdenum  mine was already sold by the bank or transferred to the management of  the investor in the person of the Russian Copper Company, one of the  shareholders of which is Russian businessman Norayr Petrosyan. After  resolving the issue of neutralizing the environmental risks  associated with strengthening the tailings dam, the field, around  which disputes have not subsided for many years, will be  re-activated.

To recall, the Vallex Group CJSC was established in 1998 and until  recently had united 20 subsidiary and affiliated companies. Among  them were Teghout CJSC, founded in May 2006, 100% of the shares  belonged to the Cypriot Teghut Investments Limited, 100% of the  voting shares of which in turn were controlled by the Armenian Copper  Program CJSC (ACP), wholly owned by the group's president Valery  Mejlumyan , as well as Base Metals, which operates a copper-gold  deposit in the village of Drmbon, Martakert region of the NKR. ACP  also operated the Alaverdi Copper Smelter, where raw materials from  the group's fields were delivered for rough processing.

Over the past 2-3 years, the Vallex Group has been negotiating with  Chinese investors to create a new, modern, environmentally friendly  metallurgical enterprise on the site of the old Alaverdi plant, which  has 200 years of history. However, the results of the negotiations  are not yet known. It is only known that by the decision of the  Deputy Prime Minister of Armenia Tigran Avinyan on July 12 last year,  a working group was created to provide state support to the  preparatory work as part of the program for the construction of a new  smelter by the Armenian Copper Program CJSC. It was reported that the  composition of the working group has already been approved, which  will be headed by the head of the office of Avinyan Varag Sisserian.  It included representatives of 4 ministries - Deputy Minister of  Economic Development and Investment Avag Avanesyan, Deputy Minister  of Nature Protection Gnel Sanosyan, Deputy Minister of Finance Arman  Poghosyan and Deputy Minister of Energy Infrastructures and Natural  Resources Vardan Gevorgyan. ArmInfo has not yet succeeded in attempts  to verify the accuracy of the information and find out the details of  the negotiations.