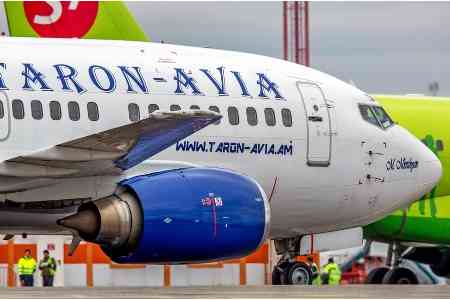 ArmInfo. Armenian Deputy Prime  Minister Tigran Avinyan commented on the termination of activity of  the Armenian airline Taron Avia. "Armenia cannot be a favorable  country for companies that do not want to be guided by international  standards. And the field of air transportation is not the  transportation of people by minibuses," he said in a conversation  with reporters on November 20.

According to the Deputy Prime Minister, Taron Avia has had problems  with one of the European aviation organizations. "Our European  partners informed us that the company does not meet certain  standards, its flights are problematic," Avinyan said.

In general, according to Avinyan, the Armenian authorities today  require strict compliance with key requirements in all areas. "We  regret, of course, that the Armenian company has to leave the market,  but flight safety should be our priority, and there is no room for  compromise," the government representative stressed, adding that  despite the fact that the government is trying to promote local  companies, it's necessary to understand that no one will be able to  work with the previous methods, within the framework of the "former  logic".

In early November, ArmInfo, citing the press service of the Civil  Aviation Committee of Armenia, reported that Taron-Avia Airlines  decided to cease activities. According to the source, earlier based  on the results of inspections and recorded omissions in LLC  Taron-Avia, the company's certificate for the right to operate  aircraft was temporarily suspended. The company was given a period of  6 months to eliminate the shortcomings. "However, the company decided  to cease operations. With this in mind, the company's certificate  number 049 for the right to operate aircraft was terminated," the  statement said.

Earlier information was spread in media that the "Taron-Avia" airline  has not operated for a long time and in the near future may finally  leave the local aviation market. According to publications, the  airline for many years has asked for privileges that the government  has now granted the Irish low-cost airline Ryanair, in particular, to  remove the duty, or the so-called "air tax" in the amount of 10  thousand drams. Meanwhile, as Levon Karamyan, commercial director of  the company complained, now, in order to ensure the entry of the  foreign airline company into the Armenian market, the authorities  agree to this and say that these conditions allegedly apply to all  airlines.