Tigran Avinyan: In 2020, the Arpa-Sevan tunnel will begin to operate  in its entirety 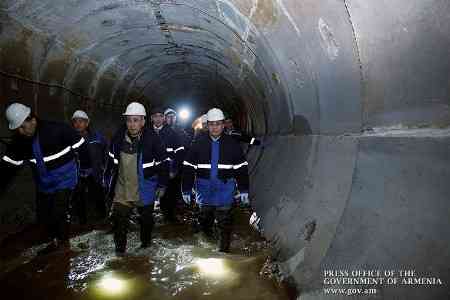 ArmInfo. In 2020, the Arpa-Sevan tunnel will begin to operate in its entirety. On December 4, RA Deputy Prime Minister Tigran Aviyan stated this in parliament,  presenting the Government's response to the request of the Bright  Armenia faction.

According to him, this year the daily monitoring of the productivity  of the use of water discharged from Sevan for irrigation purposes was  carried out. This, as noted, helped not only to avoid additional  releases from the lake, but also to implement them below the level  prescribed by law - that is, 143.8 million cubic meters instead of  170 million cubic meters.

"I think that next year the Arpa-Sevan tunnel will begin to operate  in full. At the moment, studies are being carried out regarding the  possibility of increasing the throughput of the tunnel. Most likely,  in 2020 we will get a final answer to this question", Avinyan said.

To note, the length of the hydraulic complex Arpa-Sevan is 48.3  kilometers. Its construction began in the 1960s. The tunnel starts at  Kechut reservoir on the Arpa River and flows into Lake Sevan near the  villageArtsvanist. Lake Sevan is the main source of drinking water in  the region, one of the largest alpine lakes in Europe and Asia,  located in the heart of the Armenian Highlands, at an altitude of  1914 meters.

In length, from the north-west to the southeast, Lake Sevan extends  for more than 70 kilometers, and the area of ??its water mirror  reaches almost 1.5 thousand square kilometers. The only source  originating from the lake is the Hrazdan River (a tributary of the  Araks), while 28 rivers flow into it, the total basin area of ??which  is 2776 square kilometers. By 2030, the level of the lake will be  increased to the optimal 1903.5 m.