"Silicon Mountains" Forum on Smart Solutions kicked off in Yerevan 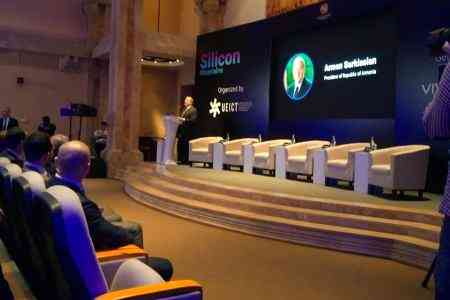 ArmInfo. Silicon Mountains launched a two-day forum in Yerevan on December 4, dedicated to "smart solutions" and global trends in the development of the IT  sector. The forum was organized by the Ministry of High-Tech Industry  of the Republic of Armenia in cooperation with the Union of ICT  Employers.

The forum is attended by specialists from leading international IT  companies such as Microsoft, Cisco, NXP Semiconductors, nCipher  Security, who presented to the business community and representatives  of the RA government sector the expected challenges and directions of  development of modern technologies, including cybersecurity,  artificial intelligence, modern IT education, etc The President of  the Republic of Armenia Armen Sarkissian also participated in the  forum, who in his welcoming speech emphasized that he supports all  efforts aimed at developing the technological field of Armenia. "I  liked the name of the forum - Silicon Mountains, I think that the  steps taken today are "hills", which once united, will become  silicone mountains, "he said. According to the head of state,  artificial intelligence, new technologies, machine learning,  mathematical modeling are priority areas for Armenia. "I have a dream  and a vision - to turn Armenia into a virtual and large international  port of information sector in the ocean of world data," the president  shared. He emphasized that it is necessary to combine resources and  efforts in order to move in the right direction, in particular, such  as new technologies, artificial intelligence, machine learning.  Drawing attention to the high level of competition in the world,  Armen Sarkissian emphasized that a lot of work is needed to build our  own port in the IT sector. "I believe that Armenia can have "Silicon  Mountains", because we are a hardworking, honest, flexible people who  have experienced difficulties and found the right solutions. It is in  our DNA", he concluded.

To note, the honored guest of the forum was a Japanese computer  scientist, professor at the US Carnegie Mellon University Takeo  Kanade. During his presentation, Professor Kanade shared with  participants the features of multi-camera technology.  According to  the agenda, the next day, within the framework of the Silicon  Mountains forum, B2B meetings will be held, which will be aimed at  introducing smart solutions in the field of economic activity.  It is  worth recalling that this year Takeo Kanade became the Laureate of  the State Prize of Armenia Global IT Award - 2019, which was  established since 2009.