Martin Galstyan will assume the post of head of the Central Bank on  June 13, 2020 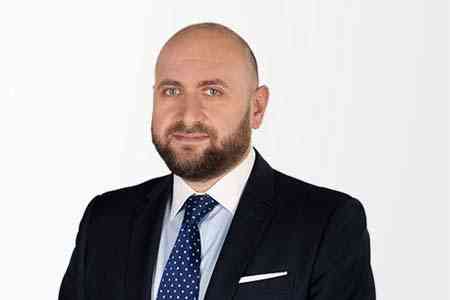 ArmInfo.Martin Galstyan will assume the post of head of the Central Bank of Armenia on June 13, 2020. ArmInfo was informed about this in the press service of the  CBA.

Galstyan's candidacy was approved on April 17 by secret ballot in the  RA National Assembly by a majority of the MPs.

REFERENCE: Martin Galstyan was born in 1978. He graduated from the  Faculty of Economics of YSU, graduate school, Ph.D. In the late  2000s, he studied at the School of Management. John F. Kennedy of  Harvard University, receiving a master's degree in public  administration. He completed several refresher and advanced training  courses in the areas of financial market analysis, financial planning  and strategy, monetary policy theory, economic theory and practice.

M. Galstyan has experience teaching at the Business School of the  American University of Armenia on the subject of industry and  competitive analysis. He teaches at AUA the subject <Competitiveness  and Clusters>. At the same university, he lectures on the licensed  program of Harvard Business School. In 2015, M. Galstyan was  recognized as the best teacher of the American University of Armenia.  The start of work in the Central Bank of the Republic of Armenia  dates back to 1998. Before being appointed a member of the Board of  the Central Bank of the Republic of Armenia in September 2018, M.  Galstyan was the head of the statistical department, and since  February 2015 - the head of the Central Bank's Training and Research  Center in Dilijan. M. Galstyan is an international consultant /  lecturer of the World Bank.  Engaged in public activities, he  participated in more than 50 international specialized events, is the  author of a number of professional publications. He is m,arried, has  three children