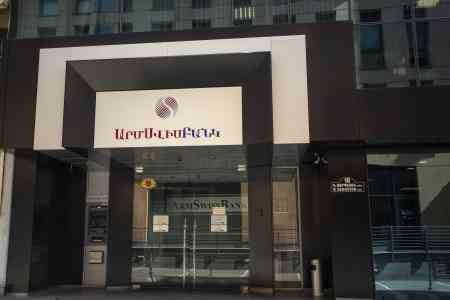 ArmInfo. Armswissbank has  successfully placed a tranche of Eurobonds in the amount of 5 million  euros. According to the press service of the bank, this tranche was  issued on June 1 and, as envisaged, the initial offering ended on  July 1.

According to the source, as part of this tranche, 50 thousand  registered coupon non-documentary bonds with a nominal value of 100  euros each were issued. The yield on the coupon is 3.5% per annum,  with a periodicity of coupon payments every six months. The maturity  period of the bonds of this issue (AMSWISB2EER8) is 5 years.

According to the Financial Rating of the Banks of Armenia prepared by  ArmInfo IC as of December 31, 2019, Armswissbank was in the TOP-3 in  terms of funds raised from corporate bonds. As of the reporting date,  this volume amounted to 32.5 billion drams or $ 67.7 million, having  increased by 19.6% in 2019.  Armswissbank's share reaches about 18%  in the total volume of this indicator for the market,

To recall, Armswissbank CJSC was established on October 7, 2004. As  of April 1, 2020, HVS Holding LLC, controlled by Vartan Sirmakes and  registered in Luxembourg, holds the 85.53% stake in Armswissbank,  while the remaining 12.47% is owned by FMTM Distribution Ltd, Vartan  Sirmakes and Chrono Star International Participations Group Franck  Muller S.a.r.l. is an indirect shareholder.