Transparency International: Results of the "Privatization and foreign  investment in Armenia 1997-2020" study indicate a lack of  transparency in transactions 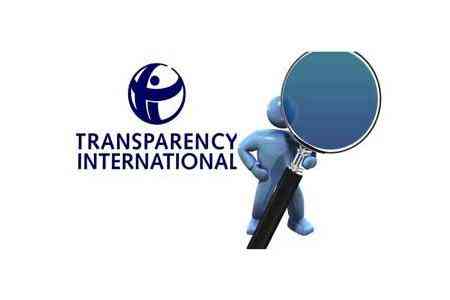 ArmInfo.  The Transparency  International (TI) Anticorruption Center prepared a study on the  topic "Privatization and Foreign Investment in the Republic of  Armenia in 1997-2020", the results of which were presented by  economist, expert of the TI Center Artak Kyurumyan.

He explained that the expediency of the selected period is due to the  fact that the main processes related to investments began in the  country after 1997. First of all, the expert presented the situation  related to the transparency of the processes carried out, indicating  in this vein that most of the latter were not transparent, which is  why it is difficult to form an idea about the privatization of real  estate or the market price. As an example, Kurumyan cited the  situation with the sale of the Sevan-Hrazdan Cascade to the Russian  side, certain documents of which remained secret. A similar situation  is also associated with the sale of the Vorotan HPPs cascade to the  Kontur Global enterprise, the initial agreement of which has not yet  been declassified. He stressed that information about investors and  owners is not disclosed enough. While it is still possible to find  information about LLC, the situation with CJSC is much worse.

In addition, the study showed that there are shortcomings in terms of  ensuring the information security of the government's database.   "During the analysis, we noticed that changes are being made and it  is not clear who makes them, why, on what basis," he said.  Speaking  about the gaps in the quality and efficiency of management, Kurumyan  stressed that until 2018, there was no proper research related to  money laundering in Armenia. Given that, according to the report of  the American agency Global Financial Integrity, about $ 10 billion  has been withdrawn from Armenia since 1997.

He also noted that over the past 20 years, monopolies have been  created in Armenia in various fields, which has led, among other  things, to the fact that the state has lost the opportunity to search  for alternative solutions, for example, in terms of importing gas  from alternative sources. In this vein, he referred to the gas  agreements concluded in 2013.  The study also showed that the  Armenian economy is sensitive to the processes taking place in the  Russian economy and associated with Russian capital. The expert noted  that Russia continues to be the leader in terms of direct investments  in the RA economy, however, since 2014, there has been a slight  decrease both in terms of investments and in terms of transfers.

"We import more than export to the Russian market, but over the years  this ratio is decreasing," he stressed. At the same time, the expert  said that the share of taxes of companies with Russian capital or  dependent on supplies from the Russian market in 2018 decreased to  13% from 15-16% in 2014. Kurumyan noted that besides  financial-economic, there are other cells of influence, naming in  this vein a number of agreements signed between the RA and the  Russian Federation, including in 1997 on friendship, cooperation and  mutual assistance, in 2013 - the Customs Union.  However, he noted  that according to a survey conducted in 2018, 92% of respondents  noted that they had a positive attitude towards relations with the  Russian Federation. <There are no anti-Russian sentiments. The only  cause for concern for the respondents is the sale of weapons of a  strategic partner to countries that are hostile towards Armenia," he  stressed.

Speaking about the present, according to the research results, the  concern refers to the absence of a legal basis for the PSRC's  decision to ban the entry of the fourth communication operator into  the Armenian market. "In January or February 2020, PSRC announced  that it does not allow the fourth telecom operator to enter the  market, because in 2008 frequencies were allocated and legal  regulations were formed for only three operators. However, there is  no reference to any article of the law, and it is not clear on what  grounds it was all declared," he complained.  Moreover, the study  also includes recommendations for the competent authorities. In  particular, TI experts recommend to the National Assembly of Armenia  to strengthen oversight functions, prohibit at the legislative level  the existence of monopolies in the field of gas and electricity  transmission, clarify legislation regarding state and official  secrets, and improve its control mechanisms, streamline entry into  other areas of enterprises providing public services, exclude a  conflict of interests of officials, settle the appointment of heads  of foreign companies to high government positions, etc.

The Center's experts propose to the RA government to create  mechanisms for obtaining information about real owners, to strengthen  the capabilities of structures authorized to fight against money  laundering, to develop a strategy for the development of energy, to  revise the concept of "small hydroelectric power plants", to develop  and implement a policy of the mining industry, to study the role of  the Minister of Defense in the process sale of energy assets, work to  attract cleaner capital from entrepreneurs of the Diaspora from  Europe, the USA and other countries, which will bring more  innovations to the RA economy, ensure and guarantee the quality and  security of the database, improve the quality of media literacy of  citizens, etc.  In addition, the Anti-Corruption Center finds it  expedient to conduct research and analysis in certain areas of the  economy in terms of foreign investment, as well as research regarding  the influence of other countries on the Armenian economy.  "I hope  our research will help today's authorities learn past lessons and  ensure further development," he concluded.

To note, the study is based on the approach of the Center for  International Private Enterprise (CIPE). To prepare the document,  experts examined the RA legislation, decisions of the RA government,  international treaties since 2000, static data, including data from  the Central Bank of the Russian Federation, and a number of  unofficial documents, including investigative materials from the  media, an analysis of processes and institutions was carried out. The  study covered mainly the following areas: energy, transport,  telecommunications, finance, and industry.