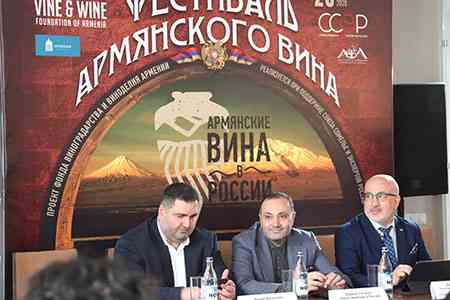 ArmInfo. The program "Armenian Wines in Russia" was launched. The official launch of the project was given during the festival of Armenian wine in the  Armenian pavilion of VDNKh in Moscow, the press service of the RA  Ministry of Economy reported.

According to the source, the project is being implemented by the Vine  and Wine Foundation of Armenia in cooperation with the Union of  Sommeliers and Experts of Russia. The goal of the project is to  promote Armenian wines in major cities of the Russian Federation  through educational and marketing programs.

President of the Union of Sommeliers and Experts of Russia Artur  Sargsyan presented the project in Moscow to more than 50 journalists,  bloggers, including Simple Wine News, Vine map, Retail.ru,  WineRetail.info, media representatives of specialized wine sites  Alcoexpert, as well as wine experts.

<Today is a great day. The Union of Sommeliers and Experts of Russia  and the Vine and Wine Foundation of Armenia signed an agreement on  the implementation of a program to promote Armenian wines in Russia.  I am glad that we have the opportunity to work together to promote  Armenian wines with the support of the state, showing what Armenian  wine is today, "said Artur Sargsyan, adding that today Armenia  produces high-quality wines, original dry wines, which will certainly  be praised in Russia.

"Russia is the largest market for the consumption of Armenian wine,  where, despite rather aggressive competition, there is also a great  potential for the consumption of Armenian wines, and this potential  should be used. Therefore, we decided to unite our efforts for the  active development of this area. For many years, Armenia was known in  Russia mainly for its Armenian brandy. Our goal is to ensure a unique  and worthy place in the Russian market for high-quality Armenian  wines, "said Zaruhi Muradyan, Executive Director of the RA Vine and  Wine Foundation.

The "Armenian Wines in Russia" project will be implemented in several  stages. At the first stage, the Union of Sommeliers and Experts of  Russia will study the Russian wine market, after which it will  develop a marketing strategy and an action plan for promotion.

At the next stage, three different levels of programs will be  developed in Russian on Armenian winemaking, history, local grape  varieties, wine brands and an information brochure "Armenia.  viticulture and winemaking for sommeliers> with the participation of  students and specialists in the field of winemaking.

Within the framework of this program, visits of Russian journalists,  famous bloggers to Armenia are planned, their tour of the wine  regions and wineries of Armenia will be organized. Programs related  to visits to Armenia will be implemented after the lifting of travel  restrictions between the two countries and the cessation of  epidemiological measures.