Expert: Armenia`s economy will reach the level of over 5% in the  context of the next 5 years 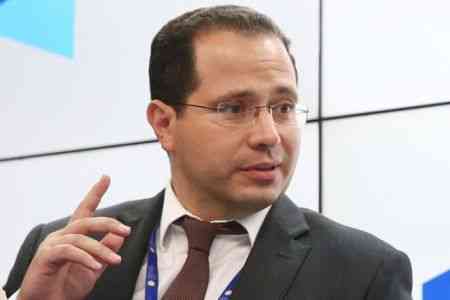 ArmInfo. In 2020, the Armenian economy sagged significantly due to the military conflict in Karabakh, as a result, the pace of recovery will not be very fast.

Yevgeny Vinokurov, Chief Economist of the Eurasian Development Bank  (EDB) and the Eurasian Fund for Stabilization and Development (EFSD),  announced this at the site of the Department of World Economy of the  National Research University Higher School of Economics, presenting  the presentation "Medium-Term Prospects for Economic Growth of the  EAEU Countries"

In particular, at the end of 2021, the expert predicts for Armenia,  an average growth of 3.8%, according to the baseline scenario, which  will accelerate in the next 5 years, reaching an average level  exceeding 5%, averaging 5.8%.

He noted that during the first decade of the 21st century Armenia  grew really very quickly, which was influenced by several factors.  Vinokurov explained that Armenia has a traditionally good situation  with attracting foreign investments into the economy through the  efforts of the Diaspora. "This is a channel that really works," the  economist stressed.

And from the point of view of the cost of state borrowing, in his  words, in all the metrics Armenia's indicator is much lower than it  should have been in comparison with comparable economies. <However,  Armenia always attracts better. A month and a half ago, it managed to  raise $ 750 million on the international market, with a maturity of  10 years, at 3.8%. This is an excellent resource cost, "added  Vinokurov. He explained that this is a consequence of the openness of  the economy, its efforts aimed at external vectors. In this regard,  the expert recalled that in addition to membership in the EAEU,  Armenia has an association with the EU, to which can be added the  immersion of the Diaspora in the development of the economy, the  factor of remittances, the share of which averages 13-18% per year in  the structure of GDP.

The economist noted that when making a forecast for the baseline  scenario in 2021 of the recovery growth of the EAEU countries, which  is taking place against the background of the attenuation of the  pandemic, he is guided, first of all, by the fact that the  restrictions will be lifted during the summer. <In the baseline  scenario, we do not take into account a full-fledged third wave,  except for some local bursts. I can be accused of duty optimism. But  I see a lot of systemic risks to economic growth for our region, but  they shift to the second half of the 2020s, "he said.

One of these risks, the expert called the high level of public debt  of the EAEU countries, except for Kazakhstan and Russia, which had to  significantly increase debts as part of action-oriented measures and  support the economy, but they are still far from the limit. But the  economies of Armenia, Kyrgyzstan and Belarus are approaching the red  line. And here, in his opinion, governments should conduct a cautious  policy, despite the fact that the structure and burden of debt for  each of these countries is different.  Speaking about inflation in  the EAEU, Vinokurov noted that the exhaustion of exchange rate shocks  and a jump in food prices will lead to a slowdown in inflation in the  second half of 2021. Accordingly, inflation for 2022-2026 is  projected to be within the target. "Although one should always bear  in mind the geopolitical risks that may cause some jumps in inflation  and currency devaluation," he noted. In particular, for Armenia, as  the expert further noted, in 2021 the inflation forecast will be  4.8%, in the context of 2022- 2026 - 3.5%.