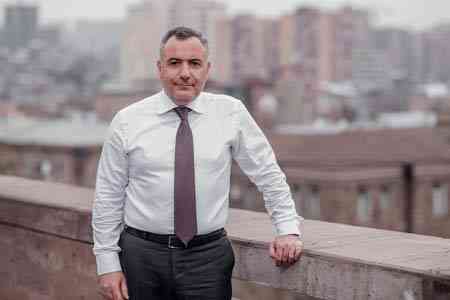 ArmInfo.The share of non-performing loans in the Armenian banking system may grow in the foreseeable future to 10% from the current 6.6%, but the banks ' reserves are sufficient to cover losses at the expense of capital. This forecast was made by the Chairman of  the Union of Banks of Armenia, Chairman of the Board of Ardshinbank Artak Ananyan,  noting that not only the banking system as a whole, but also each  bank individually, has a sufficient capital buffer to ensure  stability.

"I will not hide it, we are considering a similar scenario. Indeed,  loan defaults may increase in the foreseeable future. But banks will  cope with this task at the expense of capital buffers, " he said.

According to him, at the moment, in terms of capitalization and  liquidity, banks have sufficient reserves. "At the same time, there  are still problems that we are discussing with both the government  and the Central Bank. For example, the issues discussed at the moment  relate to the repayment of credit obligations of the population and  organizations of Artsakh, for which various ways are being actively  sought. There are 17 banks operating in Armenia, 7 of which had  branches in Artsakh, and the remaining 10 banks also actively  participated in lending programs. As a result of the military  actions, all of them suffered physical and financial damage, "  Ananyan said.

He recalled that the reaction of banks to the most serious economic  challenge that arose in 2020 against the backdrop of the coronacrisis  was fast, timely and coordinated as much as possible with the  government and the Central Bank of Armenia. As part of the 2-3-month  credit holidays announced in 2020, banks restructured loans to more  than 550 thousand individuals and 17.4 thousand legal entities,  totaling 1.3 trillion rubles. drams.

To this he added that the banking system at the same time actively  involved in the state program to neutralize the social and economic  consequences of coronaries in which was granted more than 25 thousand  loan applications totaling 119 billion AMD.

A. Ananyan noted that in 2020, banks have been actively developed  remote service channels and offered new solutions, from online  banking and ending contactless ATMs.

It should be noted that according to the Financial Rating of Armenian  Banks, 31.12.2020, prepared by the ArmInfo IC, the growth of  non-performing loans (NPL) in the Armenian banking system in 2020  accelerated strongly, despite regulatory "indulgences" in terms of  transferring part of the burden of non-repayments to 2021.

Thus, the share of NPL in the loan portfolio increased from 8% to  9.5% in 2020, and in assets - from 5.2% to 6.3%. About 64% of NPL  accounts for dubious and hopeless risk groups, and the latter retains  a significant dominant with an increasing volume. Broken down by  industry, about 47% of overdue loans are "stuck" in consumer loans,  with an annual growth in the volume of non-performing loans by 46%.   The accelerated growth of toxic loans, in turn, affected the"  drawdown " of profits. Thus, the total net profit of the Armenian  banking system, amounting to 60.4 billion drams ($115.7 million) by  the end of 2020, decreased by 20% per annum (against an increase of  34% in 2019), which was observed against the background of an  increase in the volume of overdue loans by 38.4% (against a meager 3%  decline in 2019). Only for the fourth quarter, the dynamics of profit  sharply went into an 89.5% decline (from 3.5% growth in the third  quarter), with a continuing double-digit growth in delinquency, which  could have been higher if not for the regulator's proposal to  "freeze" part of the toxic load for a year, which, however, did not  save the profit from sagging.