Ex-Minister: Creating a centralized register of bank accounts is an  attempt to adapt the Rolls-Royce engine to your own dream 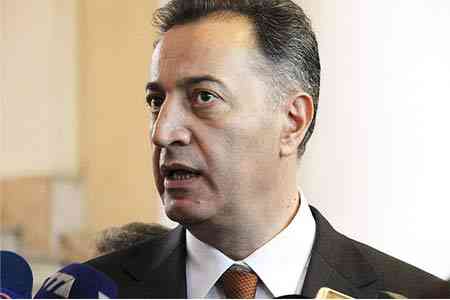 ArmInfo. Former Minister of Economy of Armenia  Karen Chshmarityan harshly criticized the concept of creating a  Centralized register of bank accounts in the Central Bank of the  country.

On his Facebook page, Chshmarityan noted that in fact, with  the adoption of this legislative initiative, which was introduced to  the Armenian deputies the day before by the Deputy Chairman of the  Central Bank of Armenia Nerses Yeritsyan, it will be necessary to about investments in the country's banking system,  because they will be zero.  According to Chshmarityan, with the  adoption of amendments to the law on the Central Bank, a possible  outflow of some large investments is not excluded. < I wonder if the  private banks of Armenia agree that the full data on the bank  accounts of all their clients should be concentrated in the Central  Bank?> and what kind of IT specialist will actually judge about the  sources of origin of certain amounts and transfer this data on a  flash drive.

It should be noted that introducing the draft law on amendments to  the RA Law on the Central Bank, Deputy Chairman of the Central Bank  of the Republic of Armenia Nerses Yeritsyan noted that the need to  introduce such a register comes from the general standards for  combating money laundering and terrorist financing. In the future,  these changes, according to him, will allow to develop innovative  ideas related to the automation of bank accounts of citizens, the  introduction of electronic currency, etc. At the same time, Yeritsyan  noted that the register does not contain information about the  account balance or current movements of funds. He explained that the  effectiveness lies in the fact that during various analyses and  communications with law enforcement agencies, not all accounts or  banks will be questioned, and only those that are the subject of  dispute will be selectively collected.

At the same time, Chshmarityan asks how often cases of terrorist  financing have been recorded in Armenia, or is the country's banking  system so undeveloped that it cannot be trusted? Banks are so well  controlled by the Central Bank's supervisory authorities and there is  no need for additional control over customer accounts.  Chshmarityan  is not satisfied with the arguments of the anti-corruption program  ...> , allegedly < we are not to blame>. This is called < fighting  corruption?> ,- the ex-minister asks the problem and what innovative  ideas are we talking about in general? What about the country's  financial security and banking secrecy, the independence of private  banks, and ensuring their regional competitiveness? Are these  useless, clueless functions? And what has become of the ambition to  develop the country's financial system as a regional financial  center, all of which has been forgotten for the sake of globalism?> -  Chshmarityan noted.

Don't the global players know who is financing terrorism? Are there  not Turkey and Azerbaijan among them? Who instigates wars, who  launders money, who finances? They're all well-known, aren't they  from Mars? Or maybe the usual < bitcoin> is not controlled by those  who actually sponsor all this, " Chshmarityan noted.  The former  Economy Minister reminded the initiator of the bill that Armenia is  neither stable and developed Malta, the Czech Republic, Spain, nor  even France or Austria, and therefore, according to the expert, there  is no need to run ahead of the locomotive, < regularly trying to  adapt the Rolls-Royce engine to your own dream>.

Meanwhile, according to financial analysts of ArmInfo, the Central  Bank's initiative most likely comes from Armenia's obligations under  the EU - Armenia Partnership Agreement (CEPA), which has entered into  force. It concerns the so-called < fifth AML Directive (Anti-Money  Laundering Directive)> The European Union, which entered into force  on January 10, 2020 and managed to bring significant changes both in  general in measures to prevent attempts at money laundering, and in  the market of cryptocurrency services, exchange offices and  exchanges, which were based on anonymity and ease of operation.   Unfortunately, this directive applies not only to the EU countries,  where the requirements for a single register become mandatory, but  also to countries that have associative relations with the EU,  although in terms of the state of the economies and the investment  environment, the associative members are significantly inferior to  the EU countries and need additional development incentives, rather  than measures that promote the opposite.

Moreover, this initiative may significantly affect the investment  attractiveness of Armenia from the third world countries, as well as  the Middle East states and Iranian investors. Analysts believe that  in the context of a general decline in investment in developing  countries in favor of developed countries in the so-called  "post-crisis" period, the adoption of EU regulations for such weak  countries as Armenia, which are also greatly weakened by the pandemic  and war, is not only impractical, but also extremely harmful.  The  country will also have to start developing the market for securities  booms, especially corporate securities, which is still in its infancy  and needs to be stimulated by foreign portfolio investors.

And in this regard, according to ArmInfo analysts, the "advanced" EU  regulations are completely unnecessary and, to put it mildly,  regressive for the economy, since the register of beneficiaries  provided for by the AML 5 Directive provides access to it for a  fairly wide range of persons, including the police without judicial  sanctions, and it concerns not only the financing of terrorism, but  also such phenomena as smuggling, bribery, corruption, tax evasion.   Analysts also note that by agreeing to the EU's "recommendations"  within the framework of the fifth AML directive, Armenia will soon  have to agree to the sixth directive, which should enter into force  this year. It provides for a significant increase in penalties for  questionable cash flows, up to the forced liquidation of companies  and serious criminal liability of individuals.