Expert: The Central Bank`s initiative is a signal to "money bags" or  life under the microscope 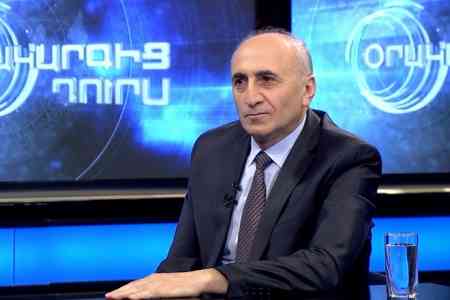 A week earlier, Deputy Chairman of the  Central Bank of the Republic of Armenia Nerses Yeritsyan, presenting  this legislative initiative in the Parliament, noted that the need to  introduce such a register comes from the global standards for  combating money laundering and the financing of terrorism. In the  future, these changes, according to him, will allow to develop  innovative ideas related to the automation of bank accounts of  citizens, the introduction of electronic money, etc.

Former Armenian Economy Minister Karen Chshmarityan harshly  criticized the idea, saying that with the adoption of amendments to  the law on the Central Bank, a possible outflow of large investments  from the country is not excluded. "What about financial security and  banking secrecy, the independence of private banks and ensuring their  regional competitiveness? Are these useless, clueless functions? And  what happened to the ambitions to develop the country's financial  system as a regional financial center? What, all this is forgotten in  favor of globalism?> - said Chshmarityan, noting that Armenia is far  from the European standard of living and therefore "it is not  necessary to adapt the Rolls-Royce engine to your own dream". .   However, according to Atom Margaryan, ideally, all financial flows  should be "visible" to law enforcement agencies, and, if necessary,  rbe in the field of view of the tax authorities. "If one of the  parties violates the law-abuses its powers, does not ensure the  safety of information about bank accounts of clients, etc. - then the  law will protect the rights of the Bank's client," he explained.

The expert advises not to be afraid of capital outflows and  investments. Every investor, according to him, should understand that  his finances will be studied "under the microscope", and he just  needs to justify the etiology of funds. "It turns out that a current  or former official suddenly builds a house for a million dollars,  invests huge amounts of money in his business, and no one has the  right to ask him where such money comes from a person who has worked  for the state all his life," Margaryan said.

In this context, according to the economist, such initiatives of the  financial regulator should be welcomed, and ordinary citizens who are  able to justify the source of their income, if necessary, should not  reflect unnecessarily. And for those who cannot confirm the legality  of their income, Margaryan suggests giving them a chance to "pay  off". For example, a third of the illegally accumulated money should  be paid to the budget, and the rest should be invested in a  joint-stock business, in which the state will act as the holder of  part of the shares.

The Central Bank's initiative to create a Centralized Register of  Bank Accounts is linked to Armenia's obligations under the EU -  Armenia Partnership Agreement (CEPA), which entered into force last  month. It concerns the so-called < Fifth AML Directive (Anti-Money  Laundering Directive)> The European Union, which entered into force  on 10 January 2020. This is a new measure to prevent money laundering  attempts, including through the market of cryptocurrency services,  exchange offices and exchanges.

According to some experts, this directive may scare off investors who  launder money in developing countries. But on the other hand, from  the point of view of the state of the economies and the investment  environment, third countries that are part of the association  relations with the EU still need additional, if not quite "legal",  incentives for development.

Related articles
Ex-Minister: Creating a centralized register of bank accounts is an  attempt to adapt the Rolls-Royce engine to your own dream
Wednesday, April 7 2021

ArmInfo. Former Minister of Economy of Armenia  Karen Chshmarityan harshly criticized the concept of creating a  Centralized register of bank accounts in the Central Bank of the  country.