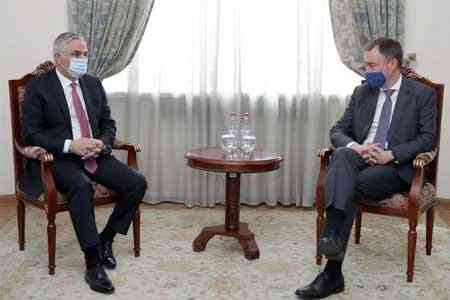 ArmInfo. Deputy Prime Minister Mher Grigoryan on April 15 received a delegation led by EU Special Representative for the South Caucasus and the Crisis in Georgia Toivo  Klaar. The head of the EU Delegation to Armenia, Ambassador Andrea  Wiktorin, also attended the meeting.

According to the press service of the government, the interlocutors  exchanged views on the work on unblocking regional transport.  Grigoryan presented the framework of the activities of the trilateral  working group chaired by the vice prime ministers of Armenia, Russia  and Azerbaijan, as well as the nature of the expert work.

During the meeting, a number of issues of mutual interest were also  discussed.