The art of interpretation: 50% is also a result. "Prosperous Armenia"  indulges in populism, insisting that writing off debt on loans is  justified 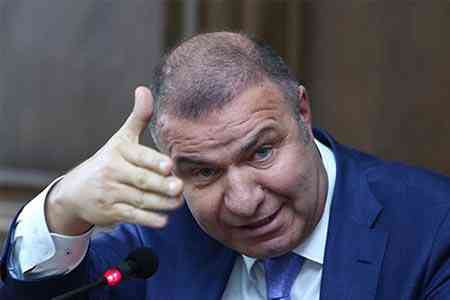 ArmInfo. MP from the Prosperous Armenia faction Mikael Melkumyan considers the proposal of the leader of the party Gagik Tsarukyan to "nullify" citizens' loans in the  amount of up to AMD 3 million as appropriate and topical. "The  proposal passed an expert discussion at the highest level, and the  comment of the head of the Central Bank, perhaps, confirms that it is  justified," Melkumyan said on May 5 in an interview with reporters.

The day before, the Chairman of the Central Bank of Armenia Martin  Galstyan, answering the question of whether he considers it realistic  to write off debts of more than 2 million borrowers, said: "I think  that absolutely should not be done. Earlier we had such an experience  - debts of a certain group of people were written off, and then our  research showed that 50% of these people were again in the same  situation as before the debt was written off, "he said. At the same  time, Galstyan added that in this way a specific incentive mechanism  is created, which does not have economic logic and runs counter to  the concept of justice. "So I think it's unwise," he added.

Meanwhile, Mikael Melkumyan interprets the words of the head of the  financial regulator in his own way.  Thus, according to the  "prosperous" MP, this suggests that such a "zeroing" at one time led  to an improvement in the financial condition of 50% of amnestied  borrowers, and only the remaining 50%, possibly, were again "in the  captivity of the debt burden."

Melkumyan shared "his professional" opinion. The problem is that,  according to the lawmaker, in a war, pandemic, when there are no  jobs, and people have assumed credit obligations to ensure their  normal activities, they cannot be expected to be able to timely  fulfill their obligations to creditors, " since they are not to blame  for the creation of such conditions. " "Plus, 50% is also a result,  and during this event (writing off debts up to 3 million - Ed. note),  we will be in completely new economic conditions," he said.  In  addition, according to him, if you look closely at the dynamics of  loan growth, you can see that the number of loans issued over the  past 2.5-3 years has grown by 550-600 thousand. "The bulk of loans  issued are consumer loans, followed by agricultural loans, student  loans, etc. That is, people are not able to live, exist without  loans, and the conditions created in the country do not allow them to  get out of this situation, "Melkumyan said.

The parliamentarian recalled Tsarukyan's words that the banks of  Armenia perform the function of pawnshops and do not leave any  chances for development. "If the current monetary policy continues  for another year or a year and a half, the number of loans will reach  4-5 million - more than the country's population," he said.  Proceeding from this, Mikael Melkumyan urges to listen to Gagik  Tsarukyan's proposal - to amnesty debts on loans, and then, after  people "breathe fresh air", to think about the competent work of  credit policy.

On May 4, during a press conference, the head of the Central Bank  Martin Galstyan stated that the banks of Armenia revised and pardoned  large amounts of loans to the wounded and killed servicemen during  the Artsakh war. The lion's share of the amnestied loans fell on the  families of the dead servicemen. In total, referring to the latest  data, M. Galstyan said that within the framework of this bill, loan  obligations for 2 billion drams have already been forgiven. At the  same time, the volume of non-performing loans in the banking system  of Armenia at the moment is about 7%. Compared to the end of 2020,  this figure increased from 6.6% to 7.1%.

According to independent financial analysts, Prosperous Armenia's  proposal is purely an electoral, populist action. This kind of  pre-election populism is quite popular in post-Soviet electoral  processes. At the same time, they note that, despite the sufficient  stability of the banking system of Armenia, its main indicators over  the past year have deteriorated somewhat due to the coronavirus  crisis. Thus, the NPL of the system has reached 7.1% of assets and  may rise up to 10% by the end of the year, which is the maximum level  by international standards.

Analysts note that NPL growth was predicted even during the first  "credit amnesty" in 2018, which only technically and for a short time  "revitalized" banks' balance sheets, creating the basis for their  intense intoxication in the future, since the reasons for this  process are still relevant and related not only with a decrease in  the real incomes of the population, and, as a consequence, a decrease  in the volume of consumer lending, but also with a decrease in the  level of profitability of the business, lending to which is also  stagnating and cannot compensate for losses from retail credit. Thus,  the proposal of "PAP" is a rather dangerous undertaking, capable of,  if not undermining, then substantially "spoiling" the stability of  the Armenian banking system, especially since some of them already  have a level of real non-repayment that is significantly higher than  the 15% level.

Moreover, only in the IV quarter the profit dynamics sharply went  into an 89.5% decline (from 3.5% growth in the III quarter) with the  continuing double-digit growth of overdue loans, which could have  been higher if it were not for the regulator's proposal to "freeze"  for a year, part of the toxic load, which, nevertheless, did not save  profits from subsidence, including for 8 banks that received a  significant loss.  This situation, according to the rating company,  was accompanied by an approaching stagnant growth in the amount of  healthy (standard) loans in Q4 to 1.3% (from 3.5% in Q3), with a  slowing annual growth to 10.3% (from 13.3 % in 2019). The annual  upward trend of this portfolio, presumably, was preserved due to the  renegotiation of agreements during the credit holidays (from March 13  to June) and the active participation of banks in the 1st and 2nd  anti-crisis state programs. Nevertheless, analysts note that the  toxicity of consumer loans is growing at an outstripping pace today.