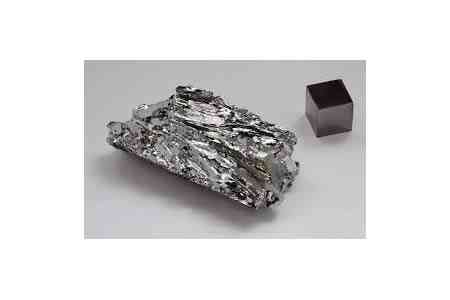 ArmInfo.On September 7, the Government of Armenia, by written vote, approved the decision "On the application of temporary restrictions on the export to third  countries of copper concentrate, molybdenum concentrate,  ferromolybdenum, as well as molybdenum products (except for HS code  8102970000: Molybdenum waste and scrap) from the Republic of Armenia,  on the establishment of the export licensing procedure, the form of  license applications and licenses ".

According to the substantiation, in recent years, there has been an  increase in exchange prices for non- ferrous metals in the world  market, which creates favorable conditions for the growth of incomes  of the mining sector in Armenia and its further development. At the  same time, according to the document, this initiative is aimed at  protecting the subsoil. In particular, given that the subsoil is the  exclusive property of the state, the state establishes the procedure  for issuing licenses in order to effectively manage subsoil use.

It is noted that in order to regulate the process of exporting these  goods, it was necessary to create an authorized body for issuing  licenses, which was recognized by the RA Ministry of Economy, as well  as to determine the procedure for issuing licenses, which would  regulate legal relations between economic entities and the state in  this direction.

This procedure provides for the issuance of a general license for the  aforementioned exported goods, indicating the number of exported  goods: the applicant can export them in separate lots during the  period specified in the general license, with the end of the limit  specified in the license. According to the authors of the bill, the  aforementioned procedure will make it possible to minimize  administration and export different parties on the basis of one  license (there will be no need to apply to the Authorized Body every  time).

At the same time, given that mining companies often need to export  products in small quantities (up to 100 kg) for laboratory analysis  to a third country, it was advisable to separate export licenses by  type (main or one-off).

This decision comes into force the next day after its official  publication and is valid for six months.

It should be reminded that on July 12 the Government of Armenia  approved the bill "On Amendments to the RA Law" On State Duty ", the  adoption of which is conditioned by the need to regulate foreign  trade in goods of strategic importance for the republic (copper and  molybdenum concentrates, ferromolybdenum).

According to researches, most of the copper mines in Armenia are  profitable at a copper price of $ 5,300,and even after paying a state  fee at $ 7,500, the sector remains quite profitable. According to the  bill, the high profits obtained from the exploitation of the  country's subsoil will be directed to the development of the  manufacturing industry, strategic assets in the mining sector and  deepening production value chains.  Specifically, the plan is to  deepen the copper value chain by first establishing high purity  copper cathode production and then helping to rapidly develop an  ecosystem of related products.

As stated in the document, the project is a temporary solution  pending a complete and in-depth revision of the sector-related policy  with the involvement of all departments in the sector. In the long  term, it is planned to revise the tax policy of the industry in order  to ensure effective taxation of excess profits from the use of the  country's subsoil.

Armenian Minister of Economy Vahan Kerobyan said then that the  Cabinet of Ministers decided to introduce export duties on some  by-products - copper and molybdenum concentrates, as a result of  which 30-35 billion drams will be additionally transferred to the  state budget in 2021, while maintaining export volumes. As he later  noted on the official Facebook page of the Ministry of Economy, the  establishment of a state duty of 15% of the international price for  the issuance of licenses, permits and certificates for the export of  raw materials, in particular ferromolybdenum, copper and molybdenum  concentrate to third countries, subject to maintaining high  international prices for the latter, in general, it will annually  provide the state budget with about 72 billion drams.

Some media outlets called this decision politically motivated,  directed against one of the largest enterprises - the Zangezur  Copper-Molybdenum Combine (in the Syunik region of Armenia), which  owners supported the "Hayastan" bloc headed by second president  Robert Kocharian during the early parliamentary elections.