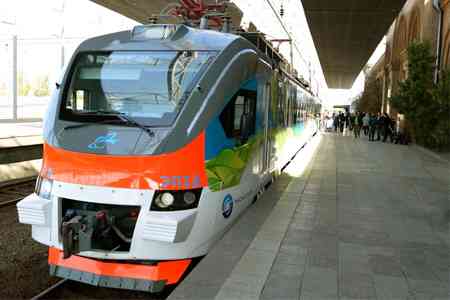 ArmInfo.The investment program for launching the Yerevan-Tbilisi high-speed train is  estimated at $ 400 million, Minister of Economy of Armenia Vahan  Kerobyan said on the air of Public TV.

In particular, he said that this issue is now being actively  discussed in a trilateral format (Armenia-Georgia- Russia). According  to the minister, if a high-speed train is launched, the travel time  from Yerevan to Tbilisi will be reduced from 9.5 hours to 2.5 hours.

<This will allow us to significantly increase the number of tourists.  Since for many European tourists Armenia and Georgia are considered  as components of a single destination in the region. Both sides will  only benefit from this, "he said.

To recall, for the first time it became known about the discussion of  the issue of launching a high-speed train Yerevan-Tbilisi following  the meeting of Minister of Economy of Armenia Vahan Kerobyan with  Minister of Economy and Sustainable Development of Georgia Natela  Turnava in the Georgian capital, which took place in early August  this year.