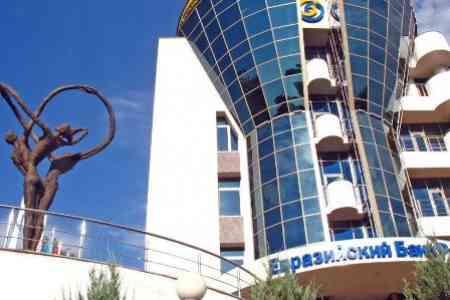 ArmInfo. The expansion of external demand has  supported the economy, consumer demand is recovering. The Central  Bank of Armenia raised its key rate amid accelerating inflation.

In Q2 2021, economic activity grew to 8.0% y / y in June and 5.0% y / y  in the first six months (4.3% y / y in Jan-May 2021). The  acceleration of the indicator dynamics is due to both the low  comparison base of the same period of the previous year, and the  growth of business activity against the background of expanding  external demand and under the influence of stimulating monetary and  fiscal policies in the first half of the year. This is stated in the  EDB's August Macro Review.

It is noted that in April-June, the recovery accelerated due to  strong dynamics in all sectors of the economy.  According to the  Bank's analysts, economic growth in 2021 will amount to 4.2%.  Expanding international and domestic demand continues to support  industrial production. Industrial growth - by 1.3% y / y in June this  year (2.1% y / y in Jan-June) is primarily due to an increase in  electricity production, mining industries and the recovery of  manufacturing output. The 0.2% y / y increase in processing in June  was driven by food, alcoholic beverages, and construction materials.

The mining industry (up 2.0% y / y in June) was supported by the  export of metal ores amid strong external demand and high copper  prices, as well as demand for building materials. The positive  dynamics will be stable throughout the year against the backdrop of  stable external demand and recovery in domestic consumption.

The volume of construction work increased by 1.3% y / y in June (in  Jan-June - by 10.8% y / y) due to an increase in funding from the  state. Meanwhile, the dynamics of construction, financed by foreign  investments, remains negative since the beginning of the year, which  indicates the perception of country risk by private investors as  high.

In June, the turnover of retail trade (by 3.2% y / y) and the  organization of accommodation and catering increased (2.4-fold).  Strong dynamics is largely due to the low comparison base of the  previous year, the implementation of deferred demand, as well as an  increase in the inflow of remittances.

Slower growth in household lending (to 4.4% y / y compared to 23.3% y  / y in June of the previous year) amid weak demand for borrowed funds  from the population, as well as slow growth rates in real wages  restrain consumer demand in the second half of the year. Demand will  be supported by the inflow of remittances from abroad against the  background of the recovery of labor migration and business activity  in the world, as well as the use of savings by households.

Consumer prices in Armenia increased by 8.2% y / y in July after 6.5%  in June. The acceleration in inflation is due to the rise in prices  for imported food and non-food products compared to the same period  of the previous year. An additional factor is the faster recovery in  consumer demand compared to production capacity (Central Bank of  Armenia, 2021a).

The EDB expects that the y / y rate of price growth will stabilize  near the current levels in Q3. A slowdown is expected by the end of  the year, under the influence of a tightened monetary policy, and  subject to stable stabilization of the national currency and world  prices for goods and raw materials.

The Central Bank of the Republic of Armenia increased the refinancing  rate by 0.5 percentage points to 7.0% in August 2021 amid continued  strong growth in prices and consumer demand. The regulator announced  the likelihood of further tightening of monetary conditions in the  near future due to increased risks of accelerating inflationary  expectations (Central Bank of Armenia, 2021b). In this scenario,  monetary policy could have a dampening effect on demand earlier than  expected in the baseline scenario of the EDB's forecast.

The state budget of the Republic of Armenia was executed with a  deficit of 2.4% of GDP in Jan-June 2021 (a deficit of 1.9% a year  earlier). Budget expenditures increased by 13.2% y / y in Jan-June.  Operating costs increased by 9.6% y / y, while capital - by 68%, due  to the implementation of unfinished programs planned from last year.  According to the preliminary version of the program of medium-term  expenditures for 2022- 2024, the state budget deficit is projected at  the level of 4.6% of GDP for the current year against the previously  planned 5.3% of GDP due to a decrease in planned expenditures by 0.8  percentage points. GDP.  Under these conditions, the impact of fiscal  policy on demand is assessed as constricting at the end of the  current year.

As of June of this year, the government's debt reached 67.1% of GDP,  and the total public debt - 70.9% of GDP (an increase of 3.7  percentage points since the beginning of the year). According to the  draft document of the RA Ministry of Finance on reducing the level of  government debt, the indicator will decrease to 60% already in 2022  and, while maintaining a stable trajectory, will decrease to 53.8% by  the end of 2026. The main way of implementing the program will be  fiscal consolidation: next year, expenditures budget will be reduced  by 1.6 percentage points. GDP at the expense of current expenditures,  and tax revenues will increase by 0.5 percentage points.

Meanwhile, the government is going to improve the structure of  expenditures in favor of capital investments, increasing them by 1  percentage point up to 4% of GDP by 2024 in order to support economic  growth in the long term.