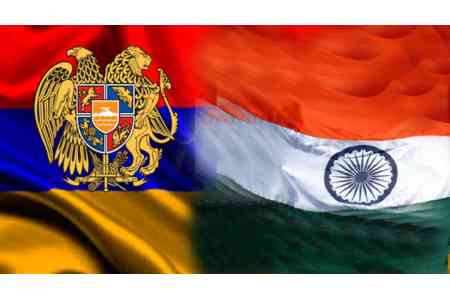 According to the press service of the ministry, Gnel Sanosyan thanked  the ambassador for the opportunity to discuss issues related to the  Armenian-Indian cooperation.

Kishan Dan Dewal, in turn, assured that every effort will be made to  expand the existing cooperation in areas of mutual interest. The  Ambassador stressed that the Indian side is interested in  infrastructure development programs in Armenia and will be glad to  discuss the possibilities of cooperation in this direction. According  to the ambassador, there are quite large companies in India that have  succeeded in this direction and which can participate in programs  implemented in Armenia.

To note, the port of Chabahar, the largest port in the Iranian  region, is the closest point of connection between Central Asia and  the open sea. It is a strategic point for the transit of goods from  Asia to Europe.  The port has an annual handling capacity of about  8.5 million tons; ocean-going vessels with a cargo of up to 100,000  tons can call there. It is also planned to open an international  airport in the port of Chabahar.  Earlier it was reported that the  port would be fully operational in April-May. Chabahar is controlled  by financial investments of India, according to a contract between  Iran and India, the operation of this port was leased to India for a  period of 10 years and allows the transit of goods in the following  ways: From India through Iran to Afghanistan and the countries of  Central Asia, bypassing Pakistan.

Back in March 2021, the Indian Ambassador to Iran announced that the  country was going to include Armenia in the North-South transport  corridor being created through the Iranian port of Chabahar. Already  in August of this year at the Embassy of India in Armenia, acting  Foreign Minister Armen Grigoryan stated that Yerevan is closely  following the active involvement of India in the North-South  international transport corridor project and India's interest in the  development of the Chabahar port, and is ready to participate in the  implementation of this program. In August of this year after the  change of government in Afghanistan, experts began to express fears  that a major project to develop the port of Chabahar in Iran,  designed to allow India to bypass Pakistan and go overland to  Afghanistan and Central Asia, risks remaining a pipe dream.