Expert: IT industry turns towards its own country 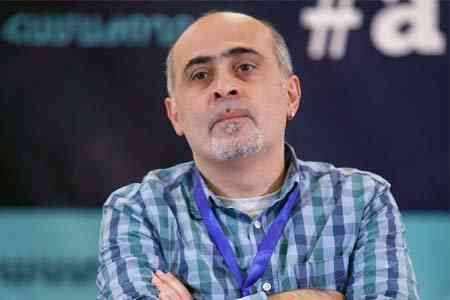 ArmInfo. At the end of October, Yerevan hosted the annual but already traditional event in the country's IT industry - DigiTec Expo2021. This time the event  took place in the exhibition area of the Karen Demirchyan Sports and  Concert Complex.

More than 100 companies gathered in the area of 1.4  thousand square meters, presenting their latest technological  achievements and developments. The scale of the event could not but  impress. It should be noted that in addition to IT companies, the  representatives of the Armenian banking system, telecommunications,  the national postal operator, etc also presented their digital  solutions, which indicates the general trend of digitalization in the  country.  On the sidelines of the exhibition, ArmInfo correspondent  managed to talk about the situation in the domestic IT industry,  about the problems and prospects of Armenia as a country with a  technological future, and about many other things with well-known  expert in the IT sector and in the field of information security  Samvel Martirosyan.

- Mr. Martirosyan, DigiTec has been held in Armenia for 15 years  already, where domestic developers present their latest developments  in the field of IT, high technologies, engineering, and other fields.  Much has been said about the high human capital in our country as a  great advantage. But against this background, it cannot but be  mentioned the tragic events of last fall, when Armenia faced a new  type of war, in which the technologies that we lacked practically won  the war...

- The point is not that we do not have any developments. The war  demonstrated one obvious truth - we do not have management at all  levels, and on top of that, there is no strategic vision and real  awareness of the situation.  Even the mobilization was carried out in   such a way that those specialists who could help the army and  security were mobilized into motorized rifle troops. That is, there  was an incorrect distribution of human resources. Let's speak to the  point! Criminal distribution of human resources!

IT companies, in addition to helping as much as they could, also  supported the economy. It must be borne in mind that it is impossible  to mobilize the entire population. The state can mobilize about 10%  of it. This is a well-known fact.

After all, if you start to mobilize everyone, the economy may  collapse, the rear will collapse, and as a result, the army will not  be able to hold out.  While the part of the population that is not  only unable to help wage a new kind of war, but also supports your  economy was mobilized.

- That is, the problem is not the lack of human resources,  specialists who were supposed to work on the technological  strengthening of the country?

- Here we also have problems. Because the county's human resource  should receive offers.  That is, we come to the conclusion that there  should be a more serious integration of the military-industrial  complex and other sectors, and the economy, accordingly, should be  science-intensive.  And this indicates the need to provide serious  support to science.  Adding some extra 20-30 million drams, one  cannot say that you are developing science and education. These two  areas should be prioritized in the straight sense of the word. Except  for fiscal injections, this still has to be at the level of  propaganda. And in our country this is given a secondary role.

If we develop exclusively as a consumer society, which is ready only  to consume and is not capable of producing anything and it is not  only about production capacities, but also culture, then naturally,  in a critical situation we become unable to withstand challenges. It  should also be noted that there is no serious understanding of what  we have in the high-tech sector. Many companies came themselves and  offered help. And it was obvious that there was no understanding of  the landscape.

- What is the reason for that?

- The problem of the Armenian IT industry is that it has been  developing as outsourcing for a very long time. We carried out orders  for foreign countries.  And as a result, there was a separation from  society, from the state.  Armenia has practically not used the  resources of its own IT industry for itself.

- Official data also indicate this. Traditionally, the main share of  the IT sector's revenue falls on services (86.2%, ed.  note), rather  than on its own production. The share of our own production is quite  scanty (0.8%, ed. note).

- The problem is that very often foreign companies win in various  tenders, although the issue is not that it is impossible to have your  own production.  Secondly, in principle, our country has begun to  follow the path of digitalization literally recently. Yes, there were  many local projects, but by and large digitalization is something new  for us.  But in general, we can say that over the past 5-6 years we  have seen qualitative and quantitative changes. First, we started not  only outsourcing but also producing something. We have large  companies.

Over the past couple of years, we have seen a new qualitative leap.   Investments have also started to flow in the Armenian IT sector.   That is, now we are already becoming a country of the international  level. So far in local segments, but it is obvious that some kind of  barrier has already been overcome. And finally, we have a digital  transformation going on inside us, which is most visible now in the  financial sector in the field of fintech.

We, however, are lagging very seriously behind many countries. But at  least we already see that there is some kind of breakthrough forward.  This means that finally the IT industry turns towards its own  country. And production is also shifted to serving the domestic  market.

- And what has changed?

- The psychology has changed, fortunately. There was a possibility,  that we will  follow a negative scenario, becoming a country of  completely outsourced services. But this did not happen thanks to a  few very large startups firstly that helped others psychologically  overcome this barrier. For example Piбsart. Suddenly, people realized  that they had to work not only for the local market and an external  buyer, but also try to build their own products, and at the global  level. Because the local market is too small. And now there is a  sharp psychological turn in the good sense of the word. We are  entering the international market, to a broader outlook. If at the  first stage the IT industry began to develop, because many Armenians  invested and built branches of their companies, then the second stage  of development is that many of them are now transferring their  businesses from abroad to Armenia, moving here, for example, Smart  Click, Krisp. Of course, there is also an outflow, but it is not so  high in the IT sector.

- Walking through the pavilions at DigiTec Expo, could you say that  we really have something to show in terms of our own production?

We have a lot of interesting things.  And, fortunately, we learned  how to sell it. Before that, developments appeared and disappeared  very quickly, because people did not know how to raise capital. This  has always been a problem.  Integration on a global scale has now  begun to take place. I think that in 2 years we will see a serious  qualitative leap.

- And in conclusion I would like to ask you in what direction, in  your opinion, we are stronger and can have our say on at the  international level?

- Our strength should be in versatility. We are a small country, and  if we start focusing on only one thing, very quickly those other  directions will disappear, and if something in the world suddenly  switches, we will simply lose flexibility. But in terms of  breakthrough capabilities, I would call artificial intelligence (AI),  and everything interconnected with it.  Because this is a new sector,  and Armenia has every chance of becoming a serious center, on the  condition that it moves forward actively, together with the state.   Because in this direction, even being a small country, have a real  chance of breakthrough growth and gaining some dominant positions,  with your small physical coverage.

- Thank you for the conversation.