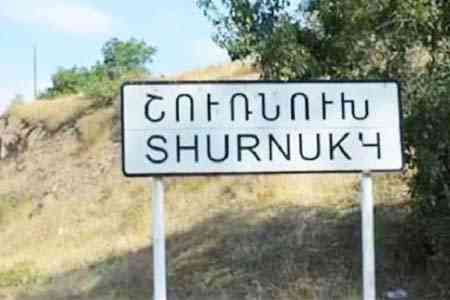 ArmInfo.The Armenian government allocated another 400 million drams (about $ 800 thousand) to the administration of the Syunik region for the solution of  priority tasks.  And the S Urban Development Committee  expressed the  hope that in H1 2022 the construction of a residential area in  Shurnukh will be fully completed.

According to Minister of Territorial Administration and  Infrastructures Gnel Sanosyan, the funds will be transferred to the  Development and Investment Fund of Syunik to address urgent social  and infrastructural issues at the current stage.

Sanosyan recalled that in April 500 million drams were allocated for  these purposes (over $ 1 million), another 200 million drams (about $  400 thousand)  in September. "Back in January, the government planned  to increase financial assistance for the indicated purposes in the  amount of 1 billion drams, and it should be noted that financial  allocations have already reached 1.1 billion drams (over $ 23  million)," the minister said. Within the framework of financing,  issues related to transport between Kapan and Chakaten were resolved,  two UAZ vehicles were purchased, which currently carry out regular  transportation, the car was also purchased for the Tegh community. In  addition, a water pipeline was built to supply the village of Kapan,  and a grain harvester was purchased for the Goraik community. There  were problems with livestock in Shurnukh; the residents were  compensated for the damage. "There is a question of compensation for  the lost homes of citizens," Sanosyan said, adding that an  interdepartmental working group established by the government is  taking an inventory of existing problems.

In addition, the government today, in an uncontested manner, adopted  a resolution aimed at continuing payments to residents of Shurnukh  and Vorotan villages, whose houses and land plots were in the  territory that came under the control of Azerbaijan. 43 residents of  Shurnukh will receive benefits for another five months.

According to chairman of the Urban Development Committee  of Armenia  Armen Ghularyan, the construction of residential buildings in  Shurnukh continues. "There were some problems, but now construction  is in full swing. On Saturday we were there, work is underway. We  hope that, in accordance with the deadlines specified in the  contract, that is, in the first half of 2022, the construction of the  residential quarter will be fully completed," he said.

It should be reminded that the "new Armenian-Azerbaijani border" has  cut the village of Shurnukh almost in half. As a result, more than a  dozen houses came on the territory controlled by the Azerbaijani  Armed Forces, at the same time the Armenian authorities initiated the  construction of a new quarter, which was suspended after the  establishment of an Azerbaijani checkpoint on the Goris-Kapan  highway. Initially, construction was to be completed by the end of  this year.