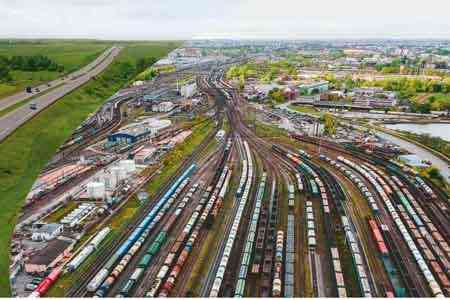 ArmInfo.The Eurasian Development Bank (EDB)  has released an analytical study on the potential of the North-South  International Transport Corridor.

As presented in the brief description of the preamble by the Bank, the study introduces the idea of a Eurasian transport framework that would offer numerous  benefits to the EAEU countries.  The International North-South  Transport Corridor is the key longitudinal corridor in Eurasia. EDB  analysts estimate that container traffic along the INSTC could reach  from 325,000 to 662,000 TEU.

Linking up the INSTC with Eurasian  latitudinal corridors could ensure around 40% of container traffic.  Non-containerised traffic could reach 8.7-12.8 million tonnes by  2030, mainly due to the transportation of grain crops. Digitalisation  and soft infrastructure play an important part in achieving these  goals.

It should be noted that International North-South Transport Corridor  (INSTC), is a multi modal transportation established in 12 SEP 2000  in St. Petersburg, by Iran, Russia and India for the purpose of  promoting transportation cooperation among the Member States. This  corridor connects India Ocean and Persian Gulf to the Caspian Sea via  Islamic republic of IRAN, then is connected to St. Petersburg and  North European via Russian Federation.