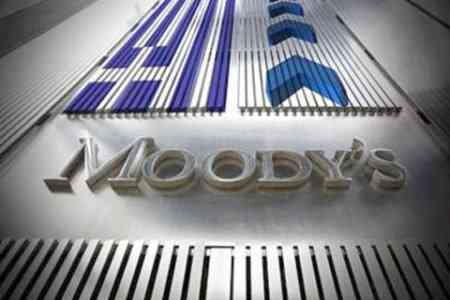 The outlook is stable.  EIA's Ba3  IFSRs reflect (1) its b1 Baseline Credit Assessment (BCA), and (2)  moderate probability of support from the government of Armenia (Ba3  stable), resulting in a notch uplift above the BCA. This is noted in  a message posted on the official website of Moody's, where it is  indicated that the assignment of this rating to the Export Insurance  Agency of Armenia is dated January 19 of this year.

The stable rating outlook on EIA's IFSR is in line with the stable  outlook on Armenia's Ba3 sovereign rating. It also reflects Moody's  expectation that EIA will maintain its current financial metrics  within the next 12-18 months.

EIA is currently the only export insurance company in Armenia. It was  established by the government to promote Armenian export within the  framework of the export-oriented industrial policy of the republic of  Armenia.

EIA's b1 BCA benefits from its solid capital adequacy relative to net  total exposure with 90% of insurance risk reinsured by Swiss  Reinsurance Company Ltd (Swiss Re, Aa3 stable), as well as sound  financial flexibility and low financial leverage. At the same time,  these strengths are tempered by the company's modest size in global  terms, low granularity of its insurance book and limited geographical  diversification, investments in high-risk assets in Armenia and weak  underwriting profitability.

EIA provides export and pre-export credit insurance against political  and commercial risks. Its share in GPW of credit insurance sector in  Armenia (including loan insurance and other financial losses  insurance) amounted to around 50% as of Q3 2021.

The insurer's diversification is constrained by its limited  geographical and products diversification with some sizeable  single-name exposure. It has concentrations of export exposure in  Russia (Baa3 stable), given the structure of Armenia's exports and  long-standing relations with Russia.

EIA's asset-quality metrics reflect a high concentration of its  investments in domestic assets, which mainly comprise current  accounts and deposits with Armenia-based banks and investments in  local bonds issued by the government of Armenia. The company's  high-risk investments, mainly deposits with local banks, accounted  for around 138% of its equity as of 31 December 2020.

The insurer has strong capital adequacy benefitting from the  significant portion of insurance risk exposure reinsured by Swiss Re.  The company's shareholders' equity as a proportion of total assets  (equity-to-assets ratio) has been consistently high at above 60%.  EIA's underwriting leverage is robust at 0.02x as of end 2020  compared with that of global peers, driven by a low level of  insurance risk relative to its capital.

The assignment of new ratings to EIA also takes into account the  effectiveness of its governance as part of Moody's assessment of  environmental, social and governance (ESG) considerations. Moody's  does not have any particular governance concerns for EIA.

Moody's assigns a moderate probability of government support  resulting in a one notch uplift above EIA's BCA. This is based on the  current full ownership of EIA by the Government of Armenia (Ba3  stable) and its public policy role in promoting Armenian export  within the framework of the Export-Oriented Industrial Policy of the  Government of Armenia. In the future the government has indicated  that it may seek investment from international investors, but the  state will continue to hold a controlling stake of not less than 51%.  EIA's Chair of the Board of Directors is Deputy Minister of Economy  three out of seven board members are representatives from the  Ministry of Economy. There is no track record of government support  in terms of provided guarantees or capital increase.

EIA's IFRS is currently rated at the level of the government of  Armenia, resulting in limited upward rating potential in the absence  of a sovereign ratings upgrade.

Conversely, downward pressure would arise in case of the downgrade of  the sovereign rating, lower support assumption, or weaker BCA of the  company.

According to the EIAA financial report as of September 30, 2021,  assets amounted to 3.1 billion drams, of which about 68% or 2.1  billion are deposits in banks, 554.1 million - investments in  government bonds, 121.6 million - reinsured assets, 49.5 million -  expected to be received insurance premiums. The total liabilities of  the EIAA as of this date amounted to 593.7 million drams, about 59%  of which or 349.4 million are accounted for by obligations under  reverse repurchase agreements (we are talking about transactions with  government bonds), and over 20% or 120.5 million are accounted for by  insurance reserves and equivalent liabilities. As of September 30,  2021, the equity capital of the EIAA is 2.5 billion drams, of which  1.5 billion is the share capital, and 262.4 million is the  accumulated profit.

At present EIAA is the only export insurance company in Armenia.  EIAA was established by the government to promote Armenian exports  within the framework of the export-oriented industrial policy of  the Republic of Armenia.