Economist: Armenia`s export structure has degraded greatly over the  past 20 years 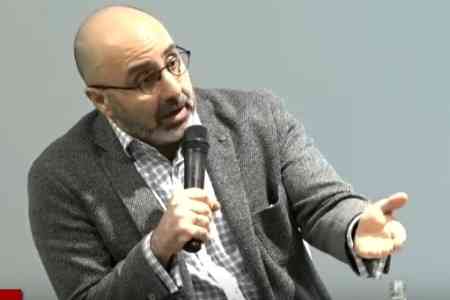 ArmInfo. The structure of Armenia's exports has seriously degraded over the past 20 years. A similar opinion was expressed by  Head of Management Advisory  Services at. Ameria company Tigran Jrbashyan on the air of the First  Channel.

He noted that despite numerous talks about the need for an export  strategy, the state still does not have such a document. According to  the economist the sector, is devoid of a specific focus.

In this regard, Jrbashyan drew attention to the fact that in the  ranking of the Massachusetts Institute of Technology "Index of  Economic Complexity", Armenia approached Kazakhstan as a country  exporting natural resources (copper and molybdenum concentrate). This  means that domestically generated value added in total exports is  constantly declining, he stressed.

According to Jrbashyan, the second set of problems is related to the  concentration of sales markets on the Russian market. In this regard,  he pointed to the growing dependence on the economic situation in the  Russian Federation and on international prices in the metal market.  "For 25 years in export policy, we still give the impression of a  kitten that has just opened its eyes and does not understand which  way to go," the economist stressed.

Jrbashyan also touched upon the system of state agreements on foreign  trade with a number of countries, which, in his opinion, is not  subject to any logical explanation.

The role of the state is to conclude intergovernmental agreements,  create institutions to promote exports, stimulate participation in  exhibitions in a particular country. In this context, Jrbashyan  wondered why the state continues to finance the participation of  Armenian manufacturers in exhibitions held in the Russian Federation.  "I'm not saying that we should not participate there. But why are  taxpayers' funds directed to the participation of Armenian exporters  in those countries where we are already widely represented and which  are quite accessible to us. Why not send these same funds, for  example, to participate in exhibitions held in Africa, Asia, Europe,  the Middle East, etc.," the economist said. According to Jrbashyan,  such a policy is due to the ease of achieving results. The  Head of  Management Advisory Services at Ameria company drew a similar  parallel with the trade representations of Armenia in a number of  countries.

At the same time, Jrbashyan pointed to the absence of institutions  aimed at stimulating exports. Today, according to him, there is a  small infrastructure represented by the Export Insurance Agency,  which is trying to insure the export of SMEs. "Earlier, on our part,  a proposal was made to create an institution akin to the so-called  EXIM Bank (Export-Import Bank), which, on the one hand, would finance  the import of technologies, on the other, the export of finished  products," the expert recalled. In this regard, he noted that the  decision to close the Pan-Armenian Bank was wrong, despite the  inefficiency of its management.  According to the economist, this  infrastructure could be reformed, equating its status with the logic  of the functioning of the EXIM Bank, which would stimulate exports,  which is actually happaning in almost all countries.

In conditions when the government does not have such an  infrastructure, tools to stimulate exports, monetary policy, as the  expert noted, becomes the main headache. "If we look at our real  exchange rate system with our main export partners, we see that over  time our real exchange rate is strengthening and our goods are losing  competitiveness in these markets," he explained.

In this vein, Jrbashyan noted that the country's monetary policy is  not considered from the point of view of economic development,  including export promotion, and the main task is seen solely in the  fight against inflation. The latter is also important, but it is  necessary to define a compromise, a golden mean. However, due to the  lack of an export strategy, the entire economy of the country,  according to him, becomes a prisoner of monetary policy. "The  question is not what the Central Bank's monetary policy should be,  but that the government is "washing its hands" and saying that it  actually does not want to stimulate export- oriented production of  finished goods and services," he noted. According to the economist,  this is a serious problem.

For this reason, Armenia, at times, loses even hard-won export  markets due to periodically emerging serious currency risks, since  when the national currency strengthens, it leads to an increase in  the cost of production and a decrease in the competitiveness of local  production.

In turn, expert, business analyst Elena Khachvankyan added that the  main Armenian export is focused on the export of a narrow limited  line of raw materials and goods that are economically uncomplicated.  These are mining raw materials, cigarettes, tomatoes, alcohol. "That  is, we export what any other country can do without making additional  efforts for this. This leads to the fact that over time our role in  international trade decreases, and with it our productivity  decreases. Because we do not develop, do not accumulate knowledge, do  not try to enter new niches, do not look for innovative solutions, do  not diversify our exports," she said, noting that all this would  allow exporters to protect themselves from external shocks.  Applying  the same approaches, according to Khachvankyan, the state will not be  able to increase productivity and will have nothing to modernize  production.