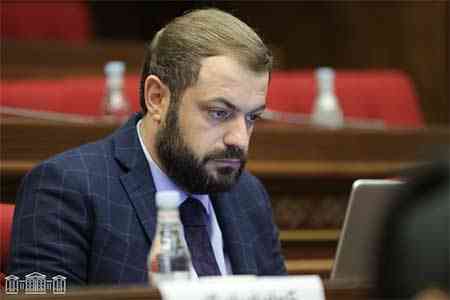 ArmInfo.The ruling faction of the Armenian parliament proposes amendments to the RA Civil Code, according to which only open joint-stock companies representing the  public interest will present financial statements.

Head of the Standing Committee on Financial-Credit and Budgetary  Affairs Gevorg Papoyan, presenting the draft law on amendments to the  RA Civil Code in the National Assembly on May 3 recalled that on  December 4, 2019, the Parliament adopted the law "On Amendments to  the Law on Joint-Stock Companies", according to which, from January  1, 2020, the accounting statements of OJSCs are not subject to  publication, with the exception of companies of public interest in  accordance with the "Law on Accounting, adopted Dec. 4, 2019: The  purpose of the law is to prevent small, often dormant companies from  filing these reports, he explained. According to Gevorg Papoyan, the  legislation should be constantly improved, and the shortcomings and  difficulties in its implementation should be eliminated. In this  context, an amendment is proposed to article 107 of the Civil Code,  according to which only organizations of public interest will present  financial statements.

In addition, with the adoption of the draft, the requirement to  present financial statements will become mandatory not for all open  joint-stock companies, but for those who publicly place securities on  the territory of the Republic of Armenia or meet certain quantitative  criteria of the RA Law "On Accounting" in terms of profit, balance  sheet value of assets, number of employees.