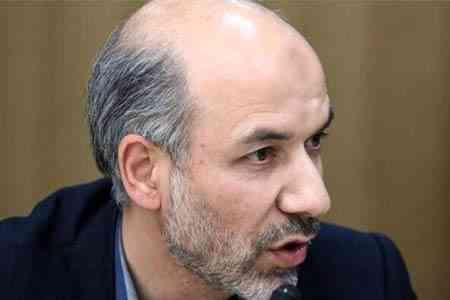 ArmInfo. Turkey did not agree on the construction of dams on the Aras (Arax) River with the other countries of the river basin, Iranian Minister of Energy Ali Akbar  Mehrabian told reporters following the 17th meeting of the  Armenian-Iranian Intergovernmental Commission as he spoke of the  threats posed by the dams Turkey has for recent years been  constructing on the Aras River.  Iran voiced its protest to Turkey  over this, he added.

"We believe the construction of dams on the Aras River and use of its  waters by the countries of the basin could have been agreed on with  all the countries the river flows through. And unilateral approaches  could pose threats to the Aras. We have expressed our concern to  Turkey, and numerous meetings with Turkey's relevant agencies have  been held. And they assured us they would take necessary steps to  dispel our fears," Mr Mehrabian said.

Iran believes all the countries of the basin must cooperate in using  the Aras water resources. "We are going to consistently use this  approach," the minister said.  Iranian Foreign Minister, Hossein Amir  Abdollahian, said yesterday that Turkey's decision to build dams  which would harm the Iranian people and negatively affect water  flowing into the Islamic Republic is "not acceptable", local news  agency IRNA reported.

"Given the environmental conditions prevailing in the region, it is  not acceptable for us that our neighbour country, Turkey, takes  measures in the field of dam construction which will cause problems  for our people in the country and the region," Abdollahian told  members of the Iranian Shura Council.

He added that in recent months he had discussed the matter with his  Turkish counterpart at least three times and asked him to pay serious  attention to the construction of dams on the Aras River.

Abdollahian explained that while there was no bilateral agreement  between Iran and Turkey on water cooperation, four months ago, Tehran  submitted a request to Ankara to establish a joint bilateral water  committee to address concerns in this field.

The Iranian minister's statement came a week after he stressed during  a telephone call with his Turkish counterpart on the importance of  accelerating bilateral cooperation with Turkey through a "joint water  committee" to deal with climate change and water issues.

Over the years, Iran and Turkey have built many dams, reducing Iraq's  main sources of water.

Turkey's construction of a dam on the Aras River, which borders Iran,  also threatens the water flowing into the Islamic Republic.