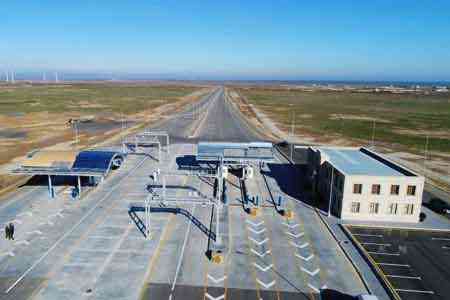 ArmInfo.Under the chairmanship of Deputy Prime Minister Hambardzum Matevosyan, a regular meeting of the Council for the Management of Investment Programs of the North-South Road Corridor, Sustainable Urban Development and the Northern  Corridor Modernization Program, as well as the reconstruction and  improvement of the M6 Vanadzor-Alaverdi- Georgia border interstate  highway (km 38 + 450 km 90 + 191) was held in the government.

According to the press service of the government, the meeting  approved a tender package for the construction of a section of the M1  Yerevan-Gyumri-Bavra road 37 + 545 km to 71 + 435 km / about 34 km /  within the framework of the North-South Road Corridor Investment  Program - Tranche 2.

Earlier, a loan agreement was signed between the Asian Development  Bank and the Republic of Armenia on providing an investment loan to  finance the investment program North-South Road Corridor Investment  Program - Tranche 2.  As part of the program, during 2021-2022 it is  planned to carry out road construction works on M1  Yerevan-Gyumri-Bavra, near Agarak community (29+600 to 37+545 km /  about 8 km/) and M1 Yerevan-Gyumri-Bavra (37+545 to 71+435 km / about  34 km /).  At the meeting of the Governing Council, other issues on  the agenda were also discussed.

The North-South project will reduce the distance from the Iranian  border to the Georgian border from 556 to 490 kilometers. The road  will significantly facilitate access to the Black Sea not only for  Armenia, but also for Iran. The project will provide access to the  Black Sea and European countries through the territory of Armenia  (Meghri-Kapan-Goris-Yerevan-Ashtarak-Gyumri-Bavra) and Georgia. The  corridor was originally scheduled to be completed in 2019. The cost  of the program was constantly revised upwards.  Meanwhile, in  September 2012, when the construction of the highway began, the  amount, which was mentioned by representatives of the Armenian  government, was many times less - $962 million. In 2009, the Asian  Development Bank already provided more than half a billion US dollars  for the construction of the highway.  Earlier it was reported that  the reconstruction of the M6 highway (Vanadzor - Alaverdi - border  with Georgia) will be completed on August 31, 2021. The repair work  is being carried out with a loan from the Asian Development Bank in  the amount of $50 million. As a result of the construction, the  travel time from Vanadzor to the border with Georgia will be reduced,  the capacity of the road will increase to 3,500 vehicles per day  instead of the previous 2,800. The works have been postponed due to  the construction of additional drainage lines, the installation of  new sewer pipes, as well as due to the crisis events of 2020.