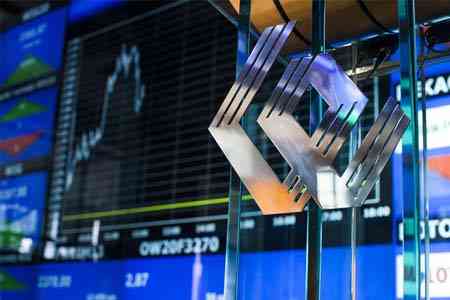 ArmInfo.The Board of Directors of the Warsaw Stock  Exchange (GPW) approved the proposal of the Board of the Exchange to  acquire a 65.03% interest in the Armenia Securities Exchange (AMX) at  a meeting on Friday. This is reported by the website: bankier.pl.

Currently, the Central Bank of Armenia (the seller) owns 90.05% of  the shares in the share capital of AMX.  As a result of the  transaction, GPW will acquire 967 ordinary shares of AMX, which will  allow it to receive 65.03% in the total share capital of the acquired  company. The cost of transaction will be AMD 826,297,550.00. Thus,  the Warsaw Stock Exchange (GPW) will become the majority shareholder  of the Armenia Securities Exchange (AMX)

As a result of the transaction, GPW will indirectly gain control over  the Central Depository of Armenia (the central securities registry in  Armenia), in the share capital of which AMX currently owns 100% of  the shares.

ArmInfo considers it appropriate to note that this is the second  attempt by the Central Bank of the Republic of Armenia to find an  institutional investor for the Armenia Securities Exchange (AMX).   During the first episode, the buyer was Nasdaq-OMX, which acquired  AMX in 2008, and from that moment a new stage of the Exchange's work  began but we should mention work, but not development. Problems  appeared with the arrival of OMX in Armenia. There were more than 200  companies on the AMX listing.  With the entry of the Exchange into  the OMX, it was necessary to change its organizational and legal  status. AMX was a self-regulatory organization of brokers, each  broker had his own voice. And in order to transfer the exchange to  OMX, at the request of the latter, AMX was turned into an open joint  stock company (OJSC). And since OMX needed guarantees to operate in  the Armenian market, the brokers transferred their shares to the  Central Bank, and the Central Bank, in turn, transferred them to OMX.

The exchange adapted its internal rules and working methods to NASDAQ  - OMX standards, EU directives, and in order to go through the  listing procedure issuers had to comply with these parameters: be  fully accountable, transparent, meet the requirements of corporate  governance standards, etc. As a result, out of more than 200  companies, five remained on the Exchange - these are those that  understood the importance of being on the Exchange in terms of  perception by foreign partners-counterparties,  and those that had  foreign investors in their capital.

But the epopee of NASDAQ-OMX lasted less than 9 years. Until 2017,  the exchange belonged to NASDAQ, which acquired it from the Central  Bank of the Republic of Armenia through an investment program for the  development of the stock market. However, in 2017, NASDAQ rejected  this project because it was not promising. During this time  (NASDAQ-OMX), not only did the stock market not work, there was  nothing and no one to trade, but also, the once very active currency  platform gradually ceased to function, and the turnover on government  securities fell sharply. The interbank credit market also left the  stock exchange. The depressive economic environment prevailing in the  country was largely to blame. Zero activity, including investment,  affected the state of the stock exchange. Back in the late 2000s, the  software for the exchange was purchased from the Moscow Exchange  (MOEX) with a grant from USAID. The activity of the Armenia  Securities Exchange  is currently extremely low due to the serious  structural problems of the economy. The only real working platform on  the Exchange is the government bond trading platform.

Now, the second episode of interest in the Armenia Securities  Exchange  (AMX )is shown by the Warsaw Stock Exchange - from  September 2020 with the specific intention of becoming a majority  shareholder. And it is noteworthy that at the same time, the funds  for the modernization of the AMX software were provided by the  Eurasian Development Bank (EDB), which at the beginning of 2021  allocated to the Armenia Securities Exchange  a grant in the amount  of about $260,000, through the Technical Assistance Fund, to finance  the bulk of the costs for the modernization and implementation of  technical means new trading system.

In September 2021, the advantages of the already operating modernized  trading system for government bond auctions were presented, as well  as the trading system of the secondary market, which at that time was  at the final stage of testing and implementation, and already at the  end of 2021 a full launch took place. In addition to providing  trading in the secondary market, the system, in accordance with  international standards, allows investors to directly access the  trading platforms of the exchange through stock brokers, as well as  trade online through web and mobile applications. Thanks to a partner  in the face of the Eurasian Development Bank, the trading system  becomes available to end investors, participation in exchange trading  is simplified, and an attempt is made to influence the development of  the capital market, creating an opportunity to increase the number of  direct market participants. Proof of this is the fact that AMX has  received the "Best Exchange in the South Caucasus" award from Global  Banking & Finance Review for two consecutive years. The EDB's  technical assistance policy will continue to contribute to the  development of the Armenian stock market, and cooperation will not be  limited to this program. Other development programs will be  implemented with the support of the EDB in the near future.

Earlier, on 18 September 2020, the Warsaw Stock  Exchange (GPW)  Management Board and the Central Bank of Armenia (CBA)  signed a term  sheet concerning negotiations to purchase 65% majority  interest in  the Armenia Securities Exchange (AMX) by GPW.

The share of the Central Bank of the Republic of Armenia in the  capital of AMX at that time was 90.1%, and the exchange itself owned  the remaining 9.9%. After the transaction, the Central Bank of  Armenia will retain 25%, and 10% will be acquired by a third party  appointed by GPW. The letter of intent signed between GPW and the CBA  defines the framework conditions for further negotiations aimed at  concluding a possible investment agreement. At the next stage, GPW  planned to conduct a comprehensive study, develop a five-year program  for the development of the Armenian exchange together with the  Central Bank of the Republic of Armenia and AMX, and establish the  final terms of the investment agreement, which may differ from the  framework conditions. Back then, GPW identified a list of more than a  dozen possible strategic projects aimed at the long-term development  of the Armenian securities exchange. The main areas of development  include the introduction of the latest solutions based on modern  technologies, the organization of commodity trading, support for the  re-listing of GPW and AMX issuers, and the provision of a modern  trading platform. The digitalization and automation of processes,  which are currently the mainstay of stock exchanges in advanced  economies, are considered as priorities.

Armenia Securities Exchange  (AMX) is the only stock exchange  operating in Armenia, which is also the sole shareholder of the  Central Depository of Armenia. The mission of the AMX group is to  contribute to the creation of a favorable investment climate in  Armenia by offering effective solutions and services, including  securities trading, clearing, settlement and management of pension  systems.