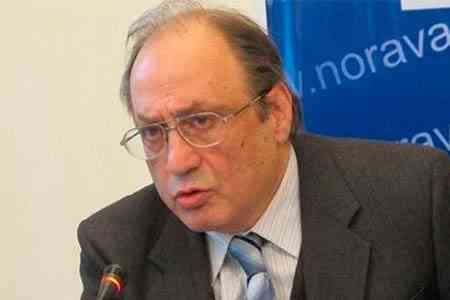 ArmInfo. Back in 2016, Iran proposed the regional initiative to expand the Persian Gulf-Black Sea project, which involves Armenia, Azerbaijan, Georgia, Bulgaria and  Greece.  In an interview with ArmInfo, Ara Marjanyan, National expert  on Energy (UNDP) and Transport (European Neighborhood and Partnership  Instrument) sectors in Armenia, spoke of the main reasons for  Armenia's interest in and support for this strategic corridor.

The transport corridor connecting the Persian Gulf with the Black Sea  region via Armenia is, no doubt, of strategic importance for Armenia.  Moreover, the corridor connects the Gulf of Oman with the Indian  Ocean. Of high importance to Armenia is the logistic and multimodal  connection between Chabahar Port on the Gulf of Oman with the  Georgian Black Sea ports, as far as Russia and Europe, the expert  said.

Mr Marjanyan believes the corridor project development underlies many  geopolitical processes in the region. The Chabahar Port development  is causing discontent in Pakistan, which considers the Iranian port  as its natural rival. On the other hand, Chabahar Port is involved in  various logistic directions, with India, for example, considering it  as a convenient transshipment point for transporting its cargoes to  the north or south, possibly via Armenia.

"In recent months, especially after the 44-day war in Artsakh, we  have seen New Delhi's activity in developing this transport corridor  from India as far as Iran, Armenia, Georgia and the Black Sea," he  said.

Azerbaijan is getting actively involved in the project as well. Baku  is actively lobbying for its communication and transit potential both  in the North-South and in the East-West directions.

"Azerbaijan is offering the Caspian ports for the North-South  corridor, which requires completion of the Astara-Rasht railway line.  Moreover, Baku is alluding to possible operation of certain ways  connected with the continental part of our region, which opens up an  opportunity to use the Julfa railway station, which project is of  paramount importance for the Armenian side," Mr Marjanyan said. In  this context, he recalls the station's namesake, Jolfa railway  station, in East Azerbaijan Province of Iran. For decades this  railway junction ensured connection between the Black Sea, Georgia,  Armenia, Nakhichevan, Iran and the Persian Gulf. This route could be  rehabilitated through implementation of the so-called Zangezur  corridor project.

"Putting aside unnecessary politesse, the most important thing for  Yerevan that should be emphasized is the rehabilitation of the Julfa  railway junction, which would connect the Gulf of Oman with the Black  Sea via Armenia. Otherwise, all the talks about unblocking the  regional transport links are worth nothing," the expert said.

Iran plans to connect its ports in the Gulf of Oman (Chabahar Port)  and in the Persian Gulf (Bandar Abbas, Bandar-e Emam Khomeyni and  Khorramshahr) in the south with the Black Sea and Caspian ports by  means of railways. Connecting the Gulf with the Black Sea will  connect four principal basins, namely, the Gulf of Oman, the Caspian  Sea (Iran-Azerbaijan), the Black Sea (Georgia and Bulgaria), and the  Mediterranean (Greece). In the South Caucasus, Armenia is the only  country that is a member of the Eurasian Economic Union (EAEU).  Therefore, it is a bridge between Iran and the bloc, which highlights  the importance of the Persian Gulf-Black Sea international transport  and transit corridor for Iran. And if Yerevan and Baku can settle  their disagreements over Article 9 of the Ceasefire Agreement of  November 10, 2020, which deals with the rehabilitation of a number of  Soviet-era railways, it will enable Iran to establish railway  communication with Armenia and Georgia. The railway track will start  running from the Jolfa railway station, in East Azerbaijan Province  of Iran, to Julfa in Nakhichevan as far as Yerevan and Tbilisi. It is  noteworthy that the Nakhichevan-Yerevan railway could replace the  expensive and devious route from Yerevan to Meghri on the  Armenian-Iranian border. And replacing this transit link could be an  important step toward full-scale implementation of the Persian Gulf  -Black Sea project.