Deputy head of CBA: Armenia occupies one of the last places in  non-cash payments among the EAEU countries 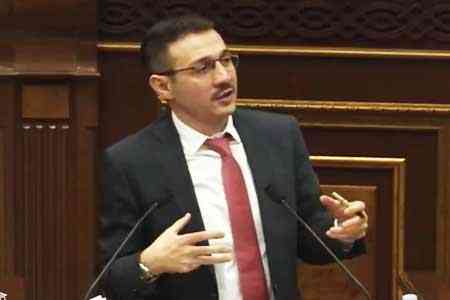 ArmInfo. Non-cash payments in Armenia increase by 20-30% on average every year. but their share in the total turnover is far from 50% in a number of areas Hovhannes  Khachatryan, Deputy Chairman of the Central Bank of the Republic of  Armenia, said this in response to a question from an ArmInfo  correspondent during the press conference on the RA Law on Non-Cash  Payments adopted on the initiative of the Central Bank.

According to Khachatryan, despite the presence of a national payment  and settlement system, a system of card payments, strict regulations  in the financial sector over the past 5-10 years, Armenia occupies  one of the last places in non-cash payments among the EAEU countries.  Meanwhile, as he noted, many developing countries have registered  great success in the field of cashless payments.

Speaking about the changes made to the RA law "On non-cash payments",  Khachatryan noted that in Yerevan the law will come into force on  July 1, 2022, in regional centers - after a year, and the regulation  will be fully distributed throughout the Republic in 2 years. He  stressed that the stimulation of non-cash payments is an important  component of the state policy for the digitalization of the economy  and management system.  It should be reminded that the National  Assembly of the Republic of Armenia on January 18 of this year,  approved in the second and final reading a package on introducing  amendments and additions to the laws of the Republic of Armenia "On  non-cash payments" and related laws developed by the Central Bank,  according to which, from July 1, 2022, Armenia will significantly  expand the non-cash circulation of funds.  From this moment, the  country will begin to limit the maximum amount of payments in cash -  all transactions exceeding 300,000 drams will have to be made  exclusively in a non-cash way.

Thus, payments from the budgets of the state and community  authorities should be made exclusively by non-cash means (for  example, scholarships, hospitality and travel expenses). Payment for  the services of notaries and lawyers, payment of wages will be made  exclusively by non-cash method. Insurance payments, credits and loans  provided by banks and credit organizations must be exclusively  non-cash.  Pawnshops will issue loans in the amount of more than 80  thousand drams exclusively in non-cash form.  This threshold will  decrease to 50 thousand drams from January 1, 2023, and further to 20  thousand drams from January 1, 2024 . The project also provides for  restrictions on replenishment and cashing out of electronic wallets.  In particular, transactions with a wallet will only be served through  the bank account linked to that wallet. Both cashing out and  replenishment of the wallet can be carried out only through a bank  account.

As the Central Bank explains, the goal of the package is that  business representatives do not have the right to refuse the buyer in  non-cash payment for services or goods. The initiative is also aimed  at reducing the shadow turnover.

Earlier in Parliament, referring to the fears that as a result of the  implementation of the initiative of the Central Bank, the price of  the final product / service will increase, including due to high  commission fees, Deputy Head of the Central Bank Nerses Yeritsyan  assured that the law will clearly state that there will be no  difference to pay in cash or non-cash form. As for the commission,  according to him, the regulation contains a provision that the  Central Bank can set the upper and lower thresholds for the  commission fee, the methodology, procedure and regulation of prices,  as well as set the "framework" if the business oversteps the bounds  of what is permitted.