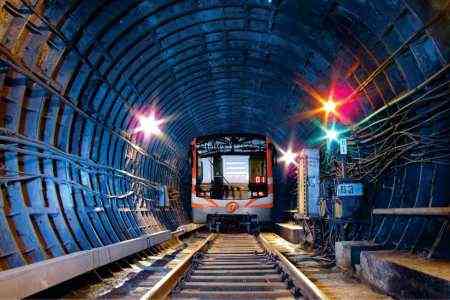 ArmInfo. Yerevan Municipality and Metrogiprotrans company, which is engaged in metro projects in the Russian Federation and post-Soviet countries, have signed an  agreement. The signing ceremony of the agreement took place on the  sidelines of the International Economic Forum in St. Petersburg.

" I was present in St. Petersburg at the signing of an agreement  between the Yerevan Municipality and the Metrogiprotrans company  which is engaged in metro projects in Russia and the post-Soviet  countries, The agreement provides for the design of the Ajapnyak  Metro (subway) station. We are implementing our large programs step  by step, to create a prosperous and comfortable environment in the  capital," former Deputy Prime Minister of Armenia Tigran Avinyan  wrote on his Facebook page.

As ArmInfo previously reported, 554 million drams were allocated for  the design work on the construction of the new Ajapnyak Metro  (subway) station. At the end of November 2021, it was reported that  the Metrogiprotrans leading Russian company won the tender announced  by the Yerevan Municipality for the design of the Ajapnyak Metro  station in the administrative district of the Armenian capital of the  same name. The preliminary version of the project, as former mayor of  Yerevan Hayk Marutyan said, involves the construction of a bridge  across the Hrazdan (river - ed. note) only for the subway,  "Metrogiprotrans" also proposes to build a second "floor" - for cars  and pedestrians. It was stated that the construction of an  underground metro station was preferable, as it is much more  convenient for people using the subway and allows the development of  various infrastructures. Chairman of the board of directors of  "Metrogiprotrans" Valery Abramson proposed to the Armenian government  also a project for the development of the subway worth $500 million.  "The Russian Agency for Export Credit and Investment Insurance  (EXIAR) is ready to support the program on favorable terms. With  these funds, we will be able to modernize the infrastructure of the  old subway, as well as plan those sections of the city towards which  the stations can be expanded," Abramson said. Earlier it was reported  that if the loan agreement with ESCAR is approved, construction work  will last about 1.5 years. According to the plan of the city  authorities, the path to the new metro station with a length of 525  meters must pass through a tunnel, the construction of which began in  Soviet times and remained unfinished. At that time, the Ajapnyak  station was left unfinished, and its continuation from the Davitashen  district on the northwestern outskirts of the city is in the project.