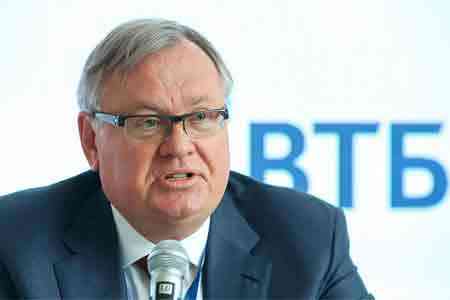 ArmInfo.VTB plans to maintain its presence in the banking market of Armenia. chairman of the bank Andrey Kostin About said it in an interview with  "Interfax" .

He noted that the bank intends to leave Georgia, but will retain in  the banking markets of Azerbaijan, Armenia, Belarus, Kazakhstan,  China and India. ,  said the head of  VTB. In other countries, the bank is discussing interaction with  national banks.

"We are only leaving Georgia, but the situation there is somewhat  different. And in Azerbaijan, Armenia, Belarus, Kazakhstan, China,  India, we remain and promote the issue of interaction with national  banks, with local banks, in order to be the key bank for settlements  in bilateral trade in national currencies. We see prospects for our  business in these countries>, Kostin noted.

It should be noted that in June 2022, VTB Bank launched money  transfers in national currencies to neighboring countries - Belarus,  Kazakhstan, Armenia and Azerbaijan. The maximum amount of a  cross-border transfer by payment details to  Belarus, Kazakhstan,  Armenia and Azerbaijan complies with the  requirements of the Central  Bank of the Russian Federation and is 150 thousand (or the equivalent  in another foreign currency) per  month, the commission is 1% of the  transfer amount. Transfers are  available to both individuals and  legal entities.  , on June 17, Member of the Board of the VTB  Bank Svyatoslav Ostrovsky stated on the  sidelines of the St.  Petersburg International Economic Forum (SPIEF).

VTB Bank (Armenia) CJSC became a member of VTB International   Financial Group in April 2004. VTB Bank PJSC, the second largest in   Russia, owns 100% of the shares of VTB Bank (Armenia).VTB Bank   (Armenia) is among the leading banks in terms of key balance   indicators in the Armenian banking market (total capital, assets,  liabilities, deposits of individuals, loan investments), holds   leadership in consumer loans and is in the TOP-5 in agricultural   loans. The Bank traditionally holds the lead in coverage of the   branch network. VTB Bank (Armenia) is one of the leaders in terms of  money transfers in Armenia. In January-September 2021, the number of   money transfers serviced by the bank reached 500,000, exceeding the   indicator of a year ago by 34%.